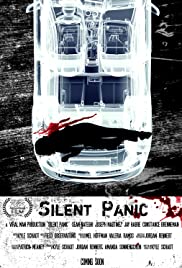 Director/writer Kyle Schadt has a good idea for a plot in his indie Silent Panic. He has a solid payoff.

It's how he gets there that is troublesome.

Schadt's basic idea is that three male friends - Eagle (Sean Nateghi), Bobby (Joseph Martinez), and Dom (Jay Habre) - are on a camping trip enjoying nature and themselves. When they return to their car in the wilds, they discover the dead body of a woman in the car's trunk.

What are they to do?

This is a Hitchcockian dilemma.

It's a concept to which we all can relate. It's universal, and its universality is what engages us.

But when Schadt comes to a crossroads of simplicity or aggressive complication, he takes the latter. It's a choice that thwarts and lessens the universality. He doesn't seem to trust the appeal of his tale, so he chooses to gussy it up.

As the trio struggle to deal with the body, they begin to unravel. It's ok that Eagle has a background that once wound him up in prison. But his reactions seem contrived. The element that most jars the tone of the tale is when Bobby returns to being a druggie. That's the end of universality.

After throwing everything at us including the bathroom tub, and a poker game sequence that doesn't work, Schadt saves his film with a solid ironic ending. But what might have been is gone.

The cast is able. Helene Udy as Sharon is especially effective as single dad Bobby's mother and caretaker of his son, particularly in a scene with Dom.

The film's male dialogue is generally natural, except for an occasional dated reference, e.g., Sharon Tate.

If Schadt had understated instead of overstating, Silent Panic would have been a different film.

Late in the film one of the characters quotes Peter Gabriel's Darkness, "I have my fears, but they do not have me."

But in Silent Panic, a more apt reference for Kyle Schadt may be Peter Gabriel's Sledgehammer.