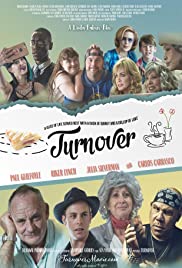 For most of its length, the indie movie Turnover is a delightful paean to the awkwardness of misfits.

But near the end, it lapses into conventional normality. It replaces spine with heart. So much for individuality.

Too many producers spoil the bakery. Turnover becomes a mass product, or at least one aimed at the masses.

Through most of it, Turnover is focused on the individuality - quirkiness - of its characters. The casting director made credible choices of actors to capture the human fallibility of the characters. [Only one didn't succeed, but it may have been because her role was superficial.]

Turnover is the story of Peter (Paul Guilfoyle), who owns an understaffed café in California. When he takes a brief leave, his manager (Riker Lynch), who has found out he is not going to own the restaurant when Peter retires, plots his vengeance. He hires a motley crew of misfits, then quits - leaving them to destroy the café.

But despite their seeming incompetence, they bond, change the café, and survive. When Peter returns he has to try to cope with the changes. He decides to try.

Director/writer Linda Palmer is in clever control. But as the film evolves, she decides to give into contrivance.

The moment that most reveals the shift in credibility is when Pepper (Isabella Blake Thomas) changes her Goth image and becomes a normal, average young woman. She relates to her mother, and voila!

There's a food fight that seems like an outtake from Cheers. And a stroke, a wedding and the happy resolution of relationships. The feel-good flower is in full blown, but they become plastic flowers.

Don't worry, since Turnover is in a café, there's a kitchen sink.

When I first grew a beard, I didn't know anyone who had one. Now in 2020 every jerk and salesman has grown facial hair. It's conformity masquerading as individuality. I'd shave mine off if I didn't have such a nondescript face.

Turnover may please the majority of audiences, but I liked it when it stressed individuality.

Now Turnover has too much glaze.