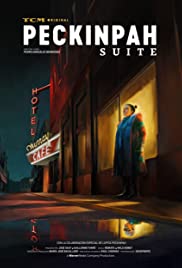 Content by Tony Macklin. Originally published on May 26, 2020 @ tonymacklin.net.

When I interviewed director Sam Peckinpah, after one question he growled, "What the fuck!," and proceeded to berate me. I ducked and covered, and then we went on to have a terrific, spirited, conversation.

But Sam was someone who did not suffer non-fools gladly.

My first contact with Peckinpah was when he personally subscribed to Film Heritage, a magazine I founded and edited for a dozen years.

I thought of Sam's annoyance when I saw the documentary Peckinpah Suite. It is like a mediocre home movie. Directed and written by Pedro Gonzalez Bermudez, Peckinpah Suite is the superficial tale of Peckinpah's daughter Lapita and her efforts to find meaning after the fact of his life.

Sam died in 1984 when his daughter was only 12, and her encounters with her father were few. So she pours bleach on his image in her search for how to give the relationship meaning. It's a self-serving act. One can understand her efforts, but they seem more vapid than sapid.

Lapita travels to Livingston, Montana, where Sam owned a cabin where he often stayed. She tries to get the walls to speak to her. Ok.

She meets several of the inhabitants of Livingston, but they seem surprisingly ignorant about the significance of their once-upon-a-time neighbor

The suite named after Peckinpah is in the Murray Hotel where he stayed. We find out that it is one of Anthony Bourdain's favorite rooms in the world.

It's too bad the walls don't talk,because we get little knowledge from the residents of Livingston. A young waitress says,"I don't really know who he is." A man says, "I know he was a great director. That's all I know about the gentleman." Gentleman?

Joseph Swindlehurst, a lawyer friend, says, "I was not involved with him on anything to do with films." Virginia Shane, who has worked the front desk for 12 years says, "a fellow who worked with Sam Peckinpah" told her stories, which she has passed on.

Sam was a hard-drinking, irascible, curmudgeon. He was notorious for having a difficult personality. In Peckinpah Suite, you wouldn't even know he drank. Maybe he drank in the closet.

It's also appropriate that the film has elevator music.

But the biggest loss in Peckinpah Suite is Sam's films.They are relegated to near irrelevancy. The owner of a theater shows The Wild Bunch. All we see are empty seats.

There also are a couple of local nonentities who speak about Sam's films, but they have little to say.

When I first met Sam, it was in Hollywood at a first-time screening of his own cut of The Wild Bunch (1969), after a different cut had been released originally.

I stood in the rain in the afternoon, in a lengthy line, to get into the theater. It's the only time I've done something like that. It was a show for those that care about movies - especially Sam's. The audience applauded when the name of cinematographer Lucien Ballard came on the screen.

After the screening I approached Sam, and told him that I was a friend of director Tom Gries. "Is Tommy here,?" he asked. Tom wasn't, but Sam promised me an interview.

Sam was in the theater of the showing of The Wild Bunch. He had more presence there than he does in the whole Peckinpah Suite.

Lapita seems to have found comfort. But at what cost?

Sam once fired his older daughter Sharon from The Getaway (1972). It's good he never saw Peckinpah Suite.

One thing is sure: he'd have hated it.