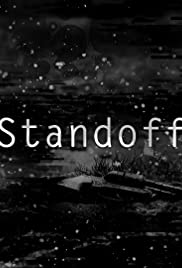 Standoff has some of the elements that makes indie productions worthy of consideration.

It is one of a kind - challenging and imaginative.

Director/editor Devan James Young, who sometimes goes by Young and other times goes by James as a surname, can't even decide on his name. But despite the malleability of his surname, he is a director who is in command in Standoff.

Standoff is a circa 13-minute short film that features words as weapons. The attention to language by writer Ilana Strauss separates Standoff from many other indie short films. The main character says, "Words are an essential ingredient for creating the imaginary world we live in."

Standoff uses pistols as memorably as a pistol was used in Bob Rafelson's The King of Marvin Gardens (1972) in which a pistol became a forgotten prop.

Throughout Standoff we expect a gun to go off, but when it first does it emits a sound like a slight bell. But the guns never lose their potential menace. The uncertainty and mystery make what's happening intriguing.

This could be a one-trick gimmick, but if so it's an effective one.

I'll never understand why film creators title their works with generic titles that other films use.

Whether or not Devan could extend his tone to a full length film is an apt question.

But given what he achieves in Standoff, with the considerable writing ability of Strauss, he deserves further attention.