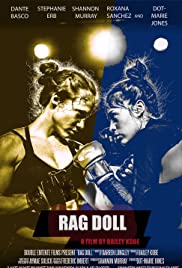 Rag Doll is a challenging and fitfully appealing indie film.

It transports us to a world of near-poverty, terminal cancer, and female MMA competition. It's a world teeming with stress.

It's a film with considerable polish. The direction by Bailey Kobe is substantial, and he is well served by a cast of actors who invest their characters with credibility. There isn't an amateurish performance in the film.

One has to suspend his or her disbelief at times with the screenplay by Darren Longley. One time is in a crucial scene with a female caretaker. Longley's screenplay may remind us of a contemporary classic, which I won't give the title, because it might give away too much of the plot.

But basically, Rag Doll transcends its twists and turns, and Longley provides a few surprises that are clever. And he gives his characters considerable depth and personality.

The most formidable performance is by Shannon Murray as Nora, a young woman who has to struggle to provide for her cancer-stricken mother. Murray holds the film together with a strong performance. She underplays, and at times leavens her performance with a hint of a smile. It's a challenging role, and Murray provides humanity.

Nora has to survive constant duress. At the motel, where she works as a maid, her boss says, "You owe me." Nora responds, "Apparently I owe everyone." MMA offers her a potential way out.

Also rendering a strong sense of humanity is Stephanie Erb as the mother. The relationship between mother and daughter is fraught with pain and solace. It's physical, emotional, and psychological.

Another strong performance is by Dot-Marie Jones as the perceptive MMA coach. Jones in actuality is 5-time World and 6-time National arm-wrestling champion. This gives her performance verisimilitude.

A major factor in the effectiveness of the film is the editing. But the editor is not mentioned in the credits. Director Kobe gave me the answer as to why, "The editor in this film was such a hassle to work with, we apparently refused credit." He concludes, "It was me." Kobe certainly deserves credit no matter how belated or wry.

Along with the cinematography by Aymae Sulick - with her background in Reality television - the editing creates stylized MMA bouts - it slows down the fighting.

There is a lot going on in Rag Doll - some of it deft, some of it not. But it has its own individual approach.

Rag Doll is a winner by split decision.