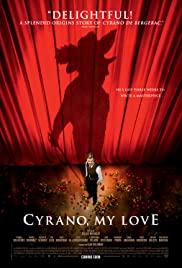 In this time of unsettling conflict and interminable hardship, some people may be looking for an escape. I have one for them. [One caveat, it's French and subtitled.]

Cyrano, My Love (2019) is a Parisian romp of a movie. It's spirited and charming shtick.

Director/writer Alexis Michalik has adapted his own play into a sprightly, uplifting journey into the cinematic world of theater life in France in 1897. He has been crucially aided by production designer Frack Schwartz, who helped him create the piquant, palpable atmosphere of a long-ago time.

Based very loosely on the experiences of Edmond Rostond, Cyrano, My Love tells a story of how Rostond (Thomas Soliveres) overcame the challenges of writer's block and family responsibilities, to write one of the most popular plays of all time, Cyrano de Bergerac.

When actor Constant Coquelin (Oliver Gourmet) agrees to have a downcast Rostand write a drama in verse for him in three weeks, Rostond sets out on a mission. He utilizes his friendship with Leo (Tom Leeb) as a stimulus to create a character who writes beautiful verses, which he can use to woo his love. Leo is smitten with Jeanne (Lucie Boujenah) and, of course, on stage Roxane is the unknowing object of Cyrano's captivating words.

Problems arise. The play is cancelled. The cast is in disarray. But have no fear. Cyrano, My Love is a positive experience.

The cast is accomplished. Thomas Soliveres is appealing as the 29-year old Edmond Rostond. Oliver Gourmet is agreeable as the major actor. And the women are feisty and affecting -- Alice de Lencquesaing as Edmond's wife, Mathilde Seigner as Marie who at one time was the mistress of the producers and now is cast as Roxane, and Lucie Boujenah as the costumer who steps up as the leading actress goes down.

Jean-Michael Martial adds a contemporary note as Honore, the black owner of a cafe, who faces racial difficulties and overcomes them. He helps save the production.

The music of Bolero adds another buoyant note.

What gives the film extra punch is the credits at the end that include film clips of actual performances of Cyrano since 1923. And also photos of Sarah Bernhardt, Edmond Rostond, et al.

There is little question that one must suspend his or her disbelief.

Cyrano, My Love could be magnifique. If you get on its wave-length.