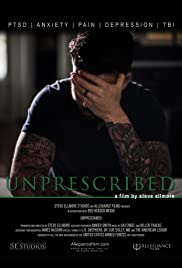 Unprescribed is a film that is a fervent advocacy for cannabis.

Directed effectively by Steve Ellmore, it is a forceful, indie documentary that focuses on the human value that cannabis has at crucial times. [Cannabis is the umbrella term for marijuana or hemp.]

The film focuses on various veterans who have been in a constant struggle with PTSD, and their difficult recovery from it.

We are introduced to veteran Josh Frey, who has gone through a brutal experience, before he was able to achieve a positive resolution. Frey - who provided the film with actual personal battle footage from Iraq - won two Purple Hearts. He was seriously wounded and had six blood transfusions to keep him alive. He underwent 22 surgeries in 18 months. His nature was destroyed by pills.

His wife says he had an "easy-going, humble nature." She remembered, "I'm truly convinced I wed my best friend." But pills destroyed his nature. She says, "The first three years he was out of the military, he was an empty shell." But medical marijuana brought him back to life.

Another veteran who went through a terrible experience was Fabian Henry who said that he, "took nine pills a day prescribed by army doctors." He explained, "We became lazy, fat, zombies. There's kind of a fog for you." His life too was salvaged by cannabis.

Boone Cutler, a gung-ho soldier, avoided marijuana, because he had been brought up thinking it was just stupid hippies who used it. He spent two years in Walter Reed Hospital with poly-trauma - traumatic brain injury. Finally after release he turned to weed after adamantly refusing it for a long time. In desperation, he relented. "I went for weed. That night I slept five hours. I hadn't slept five hours in five years." He was off pills in 17 days. Another life redeemed by medical cannabis.

After the suicide of her veteran son, Janine Lutz - who never understood what he was going through - became an activist. She created a wall of almost 400 photos of veterans who had committed suicide. She gave faces to the numbers. Her son was given Klonopin, although on his record it said not to give it to him, because one of the side effects might make him suicidal. Many of the drugs given by the army and doctors had that side effect. One female expert says, "No one has ever died of cannabis."

Marijuana still is illegal at the federal level. Lawyer Joey Gilbert says that one of the difficulties the soldiers had in getting marijuana is, "Do I risk losing my benefits?"

There is a long history of brainwashing about cannabis. The movie Reefer Madness (1936) - financed by a small church group - is a classic of melodramatic nonsense about drugs.

President Ronald Reagan called marijuana "the worst drug." And, of course, his wife championed the War on Drugs.

David Hasselhoff, in the television series Knight Rider (2008-2009), lectured his car about the evils of drugs.

Unprescribed is a strong antidote to brainwashing.

It is a particularly apt film for 2020. We live in an age in which science is being overwhelmed by venal power. Minorities - which were a main target of the anti-marijuana movement - are still targeted by the powerful. Big Pharma still is in an ugly bed with the powerful, as it was when it suppressed any rival to its ownership of pill addiction. Propaganda and political power wipe aside reality.

But in Unprescribed, veterans and their supporters stand up for their reality.

It's a reality not based on propaganda and power.

It's a reality based on convincing experience.