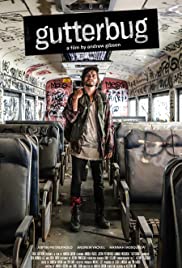 Gutterbug is an indie that wallows in its own self-indulgence.

Even though it starts out trying to be credible, it quickly becomes wayward nonsense. It becomes a soap opera. And it ends with total, sentimental hokum.

Gutterbug could be an insightful look into the lifestyle of a homeless, grunge, drug culture, but it quickly loses that possibility. It's all over the place. Who knew there was a kitchen sink in Ringer Park?

Director Andrew Gibson shot the film in Allston - a neighborhood in Boston. Some of it is in Ringer Park. This has potential.

But Gibson and co-writer Chris Tobin decide to go with an in-your-face erratic slog that goes into a toxic La La Land, instead of staying in reality.

Bug (Andrew Gibson) lives a homeless existence, accompanied by Slim (Justin Pietrapaolo) and his girlfriend Jenny (Hannah Mosqueda). It's day to day survival, living in the moment. Suddenly on his 21st birthday Bug decides to make a change. This leads to rigged chaos.

The screenplay by Chris Tobin and director Gibson offers the actors little to work with. But even if they had something to work with, it's doubtful they would be more than mediocre. Director Gibson likes to use their wild-eyed grimaces. Subtlety is not his forte.

The writers offer no fresh language. Bug, in narration, speaks about life and the world, "It's sort of like the ocean or outer space or hell." It's a dull hell.

In one scene Eddie, the mentally-challenged clerk at a store, tells Jenny he wants to have a date with her. He says, "You should come over to my house. My mother makes really good beef stew." No one ever said that.

The one actor who does survive is Hannah Mosqueda. Except for the film's penultimate shot, her talent remains intact. She creates a character with some human depth.

If Gibson has a future he should keep Mosqueda.

But, most of all, he should stick to one genre.