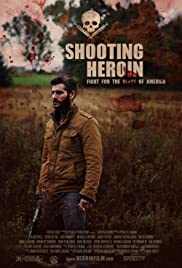 Shooting Heroin is an indie film about an appalling problem - the plague of opioid addiction.

Director/screenwriter/editor Spencer T. Folmar seems like a filmmaker trying to serve two masters. He has both a MFA and a Master's in Theology.

Although Folmar has said he was strongly affected when he saw Darren Aronofsky's Requiem for a Dream (2000), there is little evidence of that in Shooting Heroin. Aronofsky was hellbent to create a harrowing, excruciating portrait of drug addiction. Folmar pulls his punches.

Although Shooting Heroin says it was "inspired by true events," Folmar avoids being harrowing or compelling. The film deals with a demanding topic, but it's understated. This is not to say that it doesn't have its moments, but they're intermittent. It jabs, rather than punches.

Folmar keeps his faith-based audience in mind. In Rotten Tomatoes, Shooting Heroin gets 53% favorable reviews from critics; the audience - obviously many faith-based - gives it a 95%.

Shooting Heroin is set in the fictional town of Whispering Pines, in Pennsylvania. Folmar grew up in Central Pennsylvania, and the film has a sense of the desolate environment and broken populace that now exists there.

Shooting Heroin is the story of Adam (Alan Powell), a former veteran and now single father living in the bereft community. His younger sister dies from drugs, and Adam grieves not knowing what to do.

Finally he and two friends Hazel (Sherilyn Fenn) and Edward (Lawrence Hilton-Jacobs) get Adam's buddy Jerry (Garry Pastore), the local cop, to deputize them - "I hereby deputize you all to the first drug task force volunteer group to stop the flow and distribution of heroin in my 300 square miles."

But the group only lasts for a short time, when Jerry stops his support.

Violence follows, which propels Adam into action. He has a choice between despair and hope. A moment of new information leads to his decision.

Folmar's direction has polish, but some scenes jump instead of building. He has much of the responsibility since he is also editor.

The acting is solid. Alan Powell as Adam and Sherilyn Fenn as Hazel both are convincing. Lawrence Hilton-Jacobs and Garry Pastore add humanity to their one-dimensional characters.

Two recognizable actors are cast in rather thankless roles. Cathy Moriarity (Raging Bull) as Adam's mother and Nicholas Turturro as a priest are not given much with which to work. Moriarty's introduction forces her to overact, but she settles down.

Folmar seems to have satisfied his target audience. But others may want more.