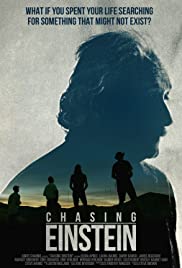 Chasing Einstein is a lacklustre documentary about scientists today seeking answers about dark matter and dark energy. The effects of gravitational waves.

The film is worth seeing, but since it can't provide answers, it settles for questioning.

One scientist says, "We need an Einstein today," but the film shows we don't have one. The film shows a pen he used and a desk he had at Princeton. But that's hardly enough Einstein.

Chasing Einstein has to depend on the scientists pursuing and reconsidering his theories, and the film counts on them having enough personality to engage us. But it often strikes us as being on a trip with amiable people whom you don't want much to do with.

Directors Steve Brown and Tim Wheeler try to gussy up some of the scientists. Italian Elena Aprile has a strong personality, and they try to enhance it. They show her riding the subway to a loud female singer's voice. She crosses the street, walks, and smokes cigarettes. No personality there. They even cut to a shot of the surf to try to give us more.

One of the film's best scenes is when Aprile oversees an experiment which is witnessed by a group that is present and another group on remote. The test fails totally, which leaves us in contact with two depressed groups. Okay.

Most of the speakers in the film are not as articulate as James Beachum who says, "The only failure is to stop searching." But that's not much of a tagline.

But dark matter beats them all.