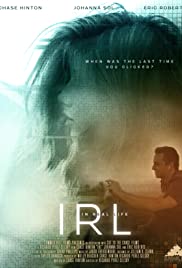 IRL [In Real Life] is a unique, provocative indie. It's about life both inside and outside the alternate reality of the internet. In IRL sex and orgasms are more meaningful than in the actual world.

IRL is the story of Ian (Chase Hinton) who tries too hard to quickly develop personal relationships with women whom he first meets on dating sites. He splurges on the first dates. In person, he blunders by admitting multiple active searches. His frankness is naive.

One woman tells him, "Plan becomes more important than person." She says, "When you try to make everything special, on some level nothing is."

But that doesn't stop him. He continues to be too aggressive.

At his job, doing graphic designs, Ian is limited. He tries to be an artist, but his boss tells him his art is "derivative." But as the film develops so too does his work on a canvas.

His life is changed when he starts texting to Sofia (Johanna Sol). Both he and she are vulnerable, but they share several interests. And their conversations have a positive, humorous spirit.

It turns out she has moved to Mexico City to take care of her mother who has cancer. She and Ian are in different countries. But she and Ian seem to share a spiritual connection. When Sofia tells Ian she has been offered a job in Mexico, he responds "You don't say no to Google."

The conclusion of IRL - where one might expect a certain resolution - provides something different. By this time the viewer may care about the relationship and expect a Hallmark conclusion. IRL may frustrate some, but its conclusion is thought-provoking.

Chase Hinton makes a suitable Ian, but Hinton's major talent may be his writing. Hinton also wrote the screenplay. It has some of the best dialogue in indies in a long time. It is clever and credible. It also makes allusions to the poet Rilke, the activist Bell Hooks, et al. There are discussions of Feminism, art, and religion.

The relationship between Sofia and her father may be a beach too far, but most of the film is convincing.

Director Ricardo Perez-Selsky strikes an effective tone. Fortunately the music by Jakob Freudendahl is not intrusive.

What is reality? Is it the actual world or the internet universe?

IRL prevails in both.