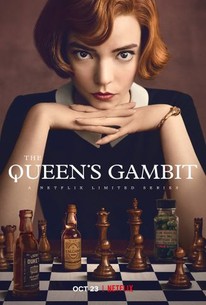 The Queen's Gambit is a convoluted, at times engrossing film. [It's a seven-episode miniseries on Netflix.]

The Queen's Gambit is set in the late 1950s and 1960s. It's the story of a young orphan Elizabeth Harmon, who becomes a chess champion and international sensation.

On her way, Beth experiences alienation, depression, travail, and a series of personal relationships that affect her in multiple ways.

Sometimes the film wanders or even sputters, but the chess matches are spirited and compelling. The main female character prevails.

Beth aspires to greatness in a totally male-dominated world. She is the queen facing males who are pawns, rooks, and even knights.

Most knightly is D.L. Townes (Jacob Fortune-Lloyd), a writer and photographer who renders her his steady, quiet support. Her bishop is Mr. Shaibel (Bill Camp) a janitor at a Catholic orphanage for girls where she comes to live after she is orphaned. He introduces her to chess and teaches her the game. At a young age, she becomes an avid learner.

The main women in Beth's life are her adopted mother Alma Wheatley (Marielle Heller), her natural mother Alice Harmon (Chloe Pine) and Jolene (Moses Ingram), her best friend and confidant in the orphanage. Alma and Alice both are victimized by being ignored and dehumanized.

Faced with a story that has static elements, director/writer Scott Frank is well served by his cast. Frank has an ability to get humanity from his actors. He previously got terrific performances in The Lookout (2007) from Jeff Daniels and Joseph Gordon-Levitt.

Annabeth Kelly portrays 5-year old Beth, and Isla Johnston portrays 8-year old Beth. But the character of Beth belongs to Anya Taylor-Joy, who portrays the coming-of-age Beth from age 15. With her immutable, unblinking gaze, Taylor-Joy gives a tour de force performance as the independent soul who is searching for identity.

The Queen's Gambit also has a crew of gifted filmmakers. Cinematographer Steven Meizler enlivens matters with his angles, lighting, and motion. Production designer Uli Hanisch creates a credible ambience from the past. And editor Michelle Tesoro adds life to the bevy of crucial chess matches.

Ultimately, The Queen's Gambit is a well-played match.

In the credits for The Queen's Gambit, there's a fleeting reference to Walter Tevis. It goes by so quickly, one probably doesn't even see it. But it's crucial.

The teleplay for The Queen's Gambit was written and directed by Scott Frank. But the novel on which it is based was written by Walter Tevis.

Who is Walter Tevis? Tevis wrote four novels that were made into important films (if you include The Queen's Gambit).

Tevis wrote the novel The Hustler (1959), which was made into the classic film (1961), directed by Robert Rossen, and starring Paul Newman - in a signature performance -, George C. Scott, Jackie Gleason - in his best film role - and Piper Laurie. The screenplay also was written by Rossen, but the essential source was Tevis' novel.

25 years later Tevis' novel The Color of Money (1984) was made into a film (1986) directed by Marty Scorsese, with Tom Cruise, Newman, and Mary Elizabeth Mastrantonio. This time the screenplay was by Richard Price. It dropped Minnesota Fats from the novel, and it added the flashy part of Vince Lauria, which was played by Tom Cruise. Tevis had written a screenplay, but it was discarded and replaced by Richard Price's adaptation.

After seven nominations, Paul Newman won the Best Actor Oscar for his performance in The Color of Money. Tevis never knew Newman finally won an Oscar for playing "Fast Eddie" Felson, the character he had created. On August 4th, 1984, Tevis died of lung cancer. The film was released on October 8, 1986.

Perhaps the most underrated film based on a Tevis novel (1963) is The Man Who Fell to Earth (1976), directed by Nicolas Roeg with a screenplay by Paul Mayersberg. It had a haunting performance by David Bowie as the alien who has some of the qualities of Howard Hughes. The screenplay is less expansive than Tevis' vision. The novel is especially relevant today.

After the publication of his novels The Hustler and The Man Who Fell to Earth, Tevis went to Ohio University where he taught from 1965-1978. [A personal caveat - although I don't think I ever met Tevis, I too was offered a position at Ohio University in the 1970s. They wanted my international film journal Film Heritage eventually published from 1965 to 1978. But Athens did not have the medical facilities that my daughter might need for her health, and the teaching schedule the English Department offered was sketchy and questionable. It had limited movement. so I stayed at the University of Dayton, even though they never knew what they had in Film Heritage.]

In 1978 Tevis left Ohio U. and went to Manhattan, New York, to again concentrate on writing. He also sought treatment for alcoholism. He was a heavy smoker, and it ultimately cost him his life.

Tevis' novels have a lot of personal concerns. His novel The Color of Money concentrates much more than the film on Tevis' own values. Tevis relates his own lapses, and rumination about aging to Eddie Felson. It's like Hemingway's The Old Man and the Sea in being symbolic of his work and what happens to him and it. Tevis said that his novel The Man Who Fell to Earth was "a very disguised autobiography."

The Queen's Gambit has several references to Tevis' own life. Like Beth, he too was jolted into alienation, when as a child he was removed from San Francisco and went to rural Kentucky. His writing can be compared to her chess playing. It gave him purpose in a life of pills, smoking and alcohol. He lost the purpose but regained it, as Beth does.

It may surprise people how much of Scott Frank's film comes from Walter Tevis' book. Most of the scenes do, and the majority of the dialogue comes from Tevis. Since the book was published 37 years ago, one may expect it to be updated. But it's hardly dated.

The film does occasionally soften Beth's portrait. Her one sexual experience with Jolene at the orphanage is absent. As is a single racially offensive word that Beth uses when she insults Jolene. This is 2020.

But Tevis in 1983 created the friendship of Beth and Jolene, who is black a long time before it became a norm.

In the book and film Beth goes to Townes' room. In the book she wants sex, but they play chess. In the film they are interrupted by Townes' roommate.

A few references from the past are dropped from the film. Beth and Alma visit Radio City Music Hall where they see West Side Story and the Rockettes. Frank erases that experience.

What perhaps is most surprising about Tevis' book is how powerful and evocative the frequent chess scenes are. This is not Melville describing whaling. It's potent writing.

Scott Frank made an entertaining film.

But its heart and soul come from Walter Tevis.