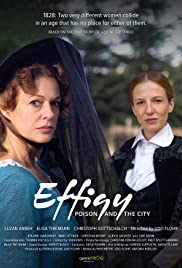 Effigy - Poison and the City (Effigie - Das Gift und Stadt) is a German indie. It's a peculiar period piece.

Set in Bremen during the 1820s, early on it's like seeing a painting dry. It begins in a slow-paced, unremarkable manner, introducing characters who seem of minimal interest. It starts as merely an evocative portrait.

Women fighting for recognition in a man's world and the conflict between status quo and progress are not exactly new themes. And at the beginning, they seem to have little impact.

But where the film goes into unfamiliar territory is the introduction of a possible female serial killer - one of the first.such figures. The key character Gesche Gottfried (Suzan Anbeh) - was an actual person, and her experience really happened.

Bohmer and Gottfried have a cat and cat conflict that drives the film into another realm. The painting gains texture.

The film doesn't totally reveal Gottfried's motivation. It gives different sides- at times she seems religious or vengeful or evil. She says, "I can be evil, with pleasure. With delight, so to speak."

Gesche Gottfried has a dash of Hannibal Lector in her. LIke him, she has personality. They each have charm, and both are manipulative. Lector had his fava beans, and Gesche employs mouse butter - cheese spread with arsenic. Mouse butter is used to kill rodents, but Gesche kills family, acquaintances, and even children with it.

Bohmer is faced with the challenge of stopping her.

Effigy - Poison and the City is directed by Udo Flohr. He contributed to the screenplay, along with Peer Meter, who wrote a play about the events, and Antonia Roeller. [The subtitles are too contemporary.]

It's a visual film, thanks to cinematographer Thomas Kist, who has a gift for lighting and an eye for close-ups. He has many close-ups of the fiery lighting of a candle,a frog, the pouring of water in glasses, white shoes, a cup of coffee, a cup of tea. The close-ups give an intimacy to the creative ambience.

When they do, the characters and their world slowly - if sporadically - come to life.