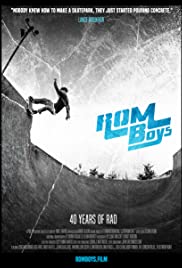 Rom Boys: 40 Years of Rad is a celebration.

The documentary, effectively directed by Matt Harris, is a very positive look back by many middle-aged men in their early 50s at a time and experience that was a joyful challenge for them.

Their shared passion was skateboarding, BMK biking, and particularly the setting for many of their exploits - Rom Skate Park in East London, England.

Rom Skate Park was constructed in 1978, and for two years was a vibrant center for the extremely popular experiences of skateboarding. By 1980 skateboarding was transcended by BMX Boys on their bikes. But Rom Park endured for 40 years until it closed in September 2019. Then there was a strong movement to preserve it. In 2014, it had become the only skate park in Europe that received historical status.

In Rom Boys: 40 Years of Rad, skateboarders, skatepark designers, street artists, and various participants speak with pride of their experiences. They share a rich nostalgia for the past.

As one says, there is a "special reason" to go to Rom, and "immerse yourself in 40 years of skateboard history." Another says, :the people at Rom were "less judgmental people than there is in church."

Rom was a site for all different kinds of people. "They come from a subculture," but it was also mainstream - "a big mix of people."

What perhaps is most remarkable is that there was little if any animosity among the skateboarders. That appears to be one of the concepts that most appeals to many of the participants.

The only thrill ride I ever took was on my bike down hill with no hands.

Rom Boys: 40 Years of Rad invites us to vicariously share in more daring exploits than many of us ever imagined. It's a memorable ride.