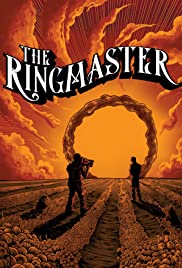 It happened to the indie documentary The Ringmaster. It breaks into two films.

The first is by novice filmmaker Zachary Capp. He received an inheritance from his grandfather, quit his job, and sought his "passion." His "passion" was to make a film about onion rings. Not just onion rings, but the best ever.

Initially onion rings seems an unlikely topic for cinematic attention. But Zachary grew up in Worthington, Minnesota, so he knew about MIchael's Steakhouse restaurant, and its specialty - onion rings, created by Michael Lang and carried on after his death by his son Larry.

Almost all of us have one restaurant that stands out almost mythically. Mine is The Pine Club, in Dayton, Ohio.

Larry and his sister Linda kept the onion rings alive, and the film captures their sense that the rings are almost holy grails. You have to suspend your disbelief a bit, but so many people say that the onion rings "are the best I ever had." "They are the biggest seller." They have a sacrosanct tradition. Zachary says, "For me these onion rings were a part of my childhood."

So Zachary tries to give them an eternal place in food memory.

He runs into a problem. The onion rings are an American Splendor. But their purveyor Larry Lang is outacted by the onion rings. He is like Harvey Pekar with no personality. When Zachary asks Larry about any childhood memory he has, Larry just looks on blankly and silently.

Larry Lang is a bland nonentity. Zachary tries to give him a life of success and recognition. He tries to make Larry into what he's not and what he doesn't want to be. Zachary says, "I wanted to change his life."

Zachary's fall is that he wants to make "the best ending ever."

The film would work without Zachary's impossible dream, but he gets convinced that's not enough. Kiss and Gene Simmons and Paul Stanley like the special onion rings at the Grand Opening of the Badlands Speedway in Sioux Falls, South Dakota. Kiss is enough to give the film a punch of celebrity.

Larry winds up in Las Vegas, at the Westgate. It's only the second time he's been on a plane. The Langs, et al. are trying to sell the onion rings. Disoriented and forgetful, Larry wanders away at night in Las Vegas. The dream is a shambles.

Los Angeles has Dodger Dogs, and Philadelphia has Philly cheese steaks. It seems as though NFL owner Mark Davis may make the Langs' specialty into Raider Rings.

The latter part of the film is taken away from Zachary, who admits making the film is an "addiction." They had shot 300 hours of footage.

Zachary is convinced that he's badgered Larry, and that there is no film. So the project is taken over and directed by Molly Dworsky and Dave Newberg.

The fact that Zachary manipulated Larry Lang just comes with the territory. Most directors manipulate their main figures. Perhaps everyone involved wanted to be kind to Larry Lang.

But ultimately he is a tragic figure brought down by onion rings.