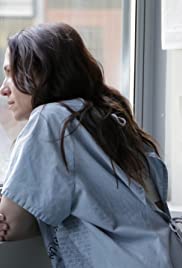 The Sounding is an indie about language.

It's about a woman Olivia (Catherine Eaton) who refuses to speak. She lives with her grandfather Lionel (Harris Yulin) on the seacoast of Maine. She has lived with him, since she was born, and her mother died in childbirth.

He routinely reads Shakespeare to her. Her not speaking is a personal choice. When Michael (Teddy Sears) - the son of his best friend - visits him after 14 years, Lionel says, "Her silence is a choice, Michael. If you attack that you attack her very being."

When Lionel dies of throat cancer, Michael - a doctor with relevant skills - decides to try to help Olivia. He decides to send her to the Portland Psychiatric Center for treatment. She has begun to speak, but only the words of Shakespeare, not any of her own.

When MIchael decides it is best to get Liv out of the institution, he is thwarted. Liv is under duress, and he has to figure out a way to try to save her. It has ironic results.

One of the problems with The Sounding is that it is often unclear who is right. The Sounding could use a clearer, sharper sense of character. When the motivation of Liv is revealed at the end, it is anti-climatic and not entirely credible.

Part of that is due to the creation of Olivia by Catherine Eaton, who directed, co-wrote (with Bryan Delaney), and plays the lead in The Sounding. Her character's commitment, which should be compelling, seems haphazard.

The best part of The Sounding is the first part, which is evocative. Much of that is due to the soulful performance of Harris Yulin.

But when the film shifts to the Psychiatric Center, it loses the tone and mood that were effective. It's like the film was sent to the institution. It's as though they used outtakes from One Flew Over the Cuckoo's Nest (1975). And softened them. What should be powerful is not.

The only scene that is effectively human in the Center is a talk between his doctor friend Edward (David Furr) and Michael.

Silence or Shakespeare may be a better option than contemporary English.

A lot of people today couldn't have a conversation if "you know" and "I mean" were abolished from the language. Sports hosts and political experts depend on them.

And the most popular word of 90% of sports announcers is "unbelievable."

Every play, every action, is "unbelievable." In what world?

Shakespeare wrote in Love's Labor's Lost, "They have been at a great feast of language, and stolen scraps."

The Sounding suggests that silence is a worthy option.