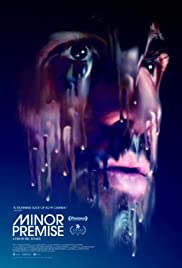 Minor Premise is an indie about the search for self.

Consciousness leads the way. The brain is the pathway.

Minor Premise is the story of Ethan Kochar (Sathya Sridharan), a neuroscientist on a quest for "cognitive awareness." He is following his late father on a "pathway to consciousness." His father was successful in his pursuit. He had a science building named after him. But Ethan is aggrieved and tormented in his continuing of the search.

Ethan has discovered that his brain has ten sections. Among them are anxiety, anger, libido, the unconscious, intellect, primitive, creativity, and euphoria. As he and they evolve, he struggles with them as he tries to integrate his brain.

The film might have greater clarity if as each fragment acts with or against him, it is better identified. Is this anxiety or anger? It's not always clear.

Minor Premise is more sporadic than compelling. Ethan's brain is not as fascinating as he thinks it is. Sometimes it seems that in chasing his brain, he is like a dog chasing his tail.

Director Eric Schultz expanded Minor Premise from his own 7-minute short. It has the same writers, and Sathya Sridharan is Ethan.

New to the feature are Dana Ashbrook as Malcolm and Dana's actual niece Paton Ashbrook as Alli. Alli and Malcolm are Ethan's sole friends and participants in his project.

It may be serendipity for me that Dana Ashbrook plays a major part in the last two indies I've reviewed. He is the husband in Ice Cream in the Cupboard. Ashbrook's major claim to fame is his role in David Lynch's Twin Peaks series, when he played deputy Bobby Briggs. In his last two indies he may be becoming typecast as a character who watches the mayhem.

Paton Ashbrrok is solid as the scientist who has a furtive relationship with Ethan.

Sathya Sridharan has to carry the film in the complex role of Ethan. He gets more haggard and messy as the film evolves, but it's not an arresting performance. This may be partly the fault of the writers.

The Tin Man could be its target audience.