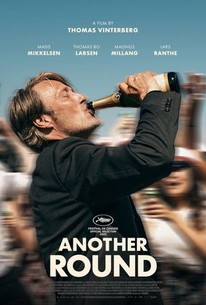 One unexpected thing about actors is their hidden talents. Often they never get to show them. When they do, it can be memorable.

With his implacable stare, the Mads' smile, and a haunting sense of melancholy grace, he is one-of-a-kind. But that's not all.

In the Danish-language film Another Round, Mads finally gets to show his special gift. He is a balletomane of jazz ballet. He is a hell of a dancer.

He was trained in New York as a Martha Graham dancer. He has said his life growing up in a working-class neighborhood was like Billy Elliot. Who knew?

In Another Round, Mads portrays Martin, a high school history teacher in Copenhagen. He has lost his commitment. One student walks out of class. Another accuses him of being "indifferent." Also, he is distant from his family -- his two sons and his wife Anika (Maria Bonnevie). He and his wife have grown apart and don't really communicate.

To celebrate the 40th birthday of Nicolaj (Magnus Millang) he goes out with him and two other friends. All four are fellow teachers. Nicolaj is a psychology teacher, Peter is choir director, and Tommy is gym teacher.

Martin doesn't want to drink, but with the urging of his friends finally he does. They are aware that Martin, like them, didn't achieve what he could have -- what he should have. At one point, Martin was on his way to a grant and a PhD. But he never achieved what they assumed he would. He is the glass empty.

As the four of them drink, Nicolaj mentions a scientific theory he has read. Psychiatrist Finn Skarderud has come up with the idea that the body should have 0.05% alcohol in it to prosper.

The next day Martin drinks at school. Later, the bibulous quartet decides to test the theory. They will drink to 0.05% during the day at school, but not at night or to excess.

At the start, with a slight buzz on, they all have positive effects. Martin gets himself and his students inspired. He says to his buddies, "I haven't felt this good in ages. Something's happening. Even when I'm sober."

But the experience has its dire consequences as they approach alcoholism. Skoals reach shoals. Will they be able to cope?

Another Round obviously has some personal history for director/co-writer Thomas Vinterberg. He originally created a short film in 1993, titled Last Round. But that featured businessmen, not teachers. The contemporary version is not Last Round, it's Another Round -- life can change, for good or bad. I assume that most people reach a point in their adult life, when they assess their reality -- what might have been, and what is.

Vinterberg and his co-writer Tobias Lindholm, with a cast that is a contender for Ensemble Cast of the Year, create a film that has a potent universality.

The only time the film veers into contrivance is when Tommy transforms a non-athlete into a star player. It's way too easy. Otherwise, the film stays in the realm of absurd but credible reality.

Vinterberg is aided by cinematographer Sturla Brandth Grovien, who -- with lighting and focus -- creates meaningful, shifting moods that are evocative.

But ultimately, Another Round depends on Mads Mikkelsen's range and humanity. He gives the film gravity and uplift. He tumbles and soars.

At the conclusion, with captivating aplomb, Mads dances his way into our lasting memory.