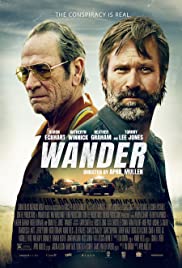 The indie Wander is two films. The first half is "fresh"; the second half is not.

I admire actors who try to extend their reach. Aaron Eckhart is a prime example in Wander. In the first half, he portrays addled, former lawman Arthur Bretnik, who hobbles because of a terrible car accident. He's fearful and paranoid. He's committed - maybe delusional. Eckhart makes him human, and his story could be gripping.

Often a film is saved or ruined by its ending. Wander starts its downfall half way through the film. Sometimes it's the actors who subvert a film. Or the director. Or even the editor. Or the composer. But, in Wander, all perform capably.

This time, it's the writer who does the film in. Tim Doiron bludgeons the leading character. He turns the film into muddled chaos. It takes it out of the real world, and drops it underground into a world of implanted, controlling chips. There are chips here, there, everywhere. Doiron might just have well turned Aaron Eckhart's character into a vampire. Eckhart has no chance, since his character has had his humanity stricken from him. It's a sorry loss.

Director April Mullen has taken advantage of terrain, until she's sent underground. She has served Eckhart's humanity well, and has used the terrain effectively. Especially the beautiful western skies. But there's little she can do when the story and tone change so drastically.

Tommy Lee Jones plays the loud, amiable sidekick, but it's Aaron Eckhart's film until it's wrested away from him.

I initially was interested that Tim Doiron seemed to introduce dualities - 2 male buddies, 2 blondes, an address that had 2 posts outside with 11 on each of them, a double dose of meds, 2 bottles twice. But then Doiron traded in challenging dualities for a multiplicity of absurdities.

A character near the end says, "Don't trust anyone." Doiron did warn us

I kept asking Alexa to show me Wander on television. She wouldn't show me. She kept bringing up Wonder.

I know wonder, and Wander is no Wonder.