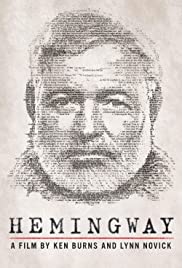 A major quality that documentarian Ken Burns has exhibited in his past work is credibility. It's been a terrific quality.

As his career evolved with co-filmmaker Lynn Novick, credibility has been at the forefront of their work.

But not now. This is not the case with Hemingway - a 6-hour, 3-part production released on PBS.

In Hemingway, the filmmakers want to stress the man over the myth. But in their documentary, both the man and the myth are undermined. A major factor in the diminishing is the interminable, cheapening musical score. The intrusive music by David Cieri undercuts language in scene after scene after scene.

I would prefer no music instead of the music that attempts to gussy up the language. That Burns and Novak decided to lean so heavily on the music is a betrayal of Hemingway. The constant piano music is the antithesis of the writer Hemingway would hate the music.

Hemingway is the elevator-music version of Hemingway.

Also problematic is the screenplay by Geoffrey C. Ward - it has the sensibility of a soap opera.

It is ironic that the best element in the film is Jeff Daniels as the voice of Ernest Hemingway. The general narration by Peter Coyote is competent, but Daniels as Hemingway is true to the artist. His voice is modulated and perceptive as he reads the words of the master.

The experts in the film - writers and literary historians - generally are a bland group. They make statements such as, "He (Hemingway) seemed to suggest..." No, he wrote, and we interpret. Very few of the experts interpret in any depth. Most of their comments are superficial and lacklustre.

Esteemed writer Tim O'Brien makes a thoughtful comment [about the end of The Sun Also Rises], but he misses the irony. Writer Edna O'Brien is oblivious to the depth of The Old Man and the Sea, and totally dismisses the novella.

Interpretation helps to discover meaning. The Old Man and the Sea can be read as a story about a simple experience. But you might not know from the comments of the experts that Hemingway often used symbols, which opens up meaning.

Symbolism is crucial to understanding Hemingway - the baton at the end of The Sun Also Rises or the marlin and the sharks in The Old Man and the Sea. In the latter, tourists, like readers, on the shore think the marlin is a shark. Hemingway is writing about misperceptions. The old man is like a writer. He's Hemingway facing the critics who destroy his work as the sharks do the marlin.

The Old Man and the Sea is a profound, personal vision.

But there's little recognition in the documentary of the importance of going beyond the surface into the art.

Androgyny and suicide are more important in the documentary.

Glibness trumps credibility. It is as though the film was made by the tourists on the shore.