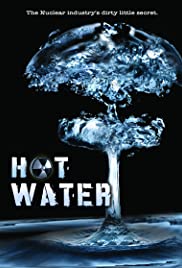 Released in 2016, now in this age of activism, it's even more relevant today. It's also hard to watch.

But like so many of the talking heads on tv these days, it offers awful problems but few - if any - answers.

Hot Water is directed and co-written by Lizabeth Rogers, with co-director, co-writer, and cinematographer Kevin Flint, The film is about the lethal contamination from uranium mines and the deadly effects of radiation that occurred in the Southwest and have spread like a plague across the nation.

The nuclear age is a killer.

There are more than 1,000 uranium mines in the area, and as one expert declares, "miles and miles and miles" of underground pipes. Once in the ground the toxic waste is an ominous threat that lasts for thousands of years.

Liz Rogers, in an effective narrative voice, humanizes the problem. She has anecdotal interviews with survivors in South Dakota and Virginia, whose families were racked and destroyed by cancer from a particular environment. One tormented woman says she believed in the government. "We were perfect guinea pigs."

The causes are familiar and lasting - people get rich creating the mines. As in most cases it's wealth versus health. One ranch owner says about his affected cattle, "They go into the food supply." Another rancher declares about resolving the problem, "Now you're hitting me in the wallet."

Short-term gain at long-term cost - right or left - is a universal factor in the lives of the majority of people.

I assume in another 50 years, people will look back at the absurd communication that is marketed today - untucked brains.

Hot Water probably won't change anyone's mind. But at least it tries to humanize the issues.

One expert says, "Radioactivity is invisible."

In Hot Water, Liz Rogers tries to give it a ravaged, human face.