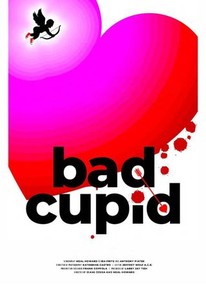 Bad Cupid is made by Luv Hurtz Pictures. Luv Hurtz. That says it all.

Bad Cupid is about as clever as the company name.

The Cupid - played blatantly by veteran actor John Rhys-Davies - is crude and aggressive. He is out to ruin bad relationships and redeem good ones.

The major broken relationship in the film is the one between David (Shane Nepvua) and Denise (Christine Turturro) who ended their romantic attachment. David is moping obsessively over his lost love.

We follow David through his dull angst. His female cousin Morris (Briana Marin) tries to help him get out of his funk.

One of the problems is that the characters - and their portrayers - don't have any appeal. Characters don't have to have appeal, but how can you care about characters who are one-dimensional, redundant, and inarticulate?

The writing - by three writers - does not help. Bad Cupid is one of those indie films in which every character constantly says "fuck," and thinks that's dialogue.

The filmmakers have the chutzpah of amateurs. It is the first feature film by co-directors Diane Cossa and Neal Howard. Who knew?

There is a scene in Las Vegas in which David and a girl he met in a line are in bed together eating chocolate cake.

The cake is sexier than they are.