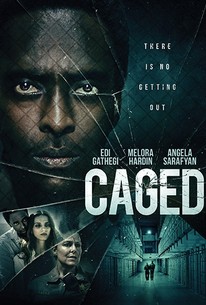 Caged fits the usual norms of the prison drama genre of a man held in prison. But its unrelenting focus is on the psychological experience of a man in solitary confinement. It takes us on a gruelling trip into the man and his tortured mind.

That gives it an original - at times compelling - focus.

Harlow Reed (Edi Gathegi) is an African-American psychiatrist, who faces life in prison for the murder of his wife. He is put in solitary confinement, because he refuses to confess. Alone in his cell he goes through an inevitable decline and deterioration, which drives him to the edge of madness and horrible delusions. We are thrust into his dire evolution.

Edi Gathegi gives us a capable performance as the ill-fated doctor.

But along with the horrors, Caged has several flashbacks to Harlow and his wife Amber (Angela Sarfyan). In Actors' Court, they could be charged with being guilty of no chemistry.

The actress who is guilty of stealing the show is Melora Hardin, who could be charged with chewing the cell scenery. As Officer Sacks, she is impressive as a cruel, malicious guard who torments Harlow. She ratchets up Nurse Ratched.

Director,co-writer Aaron Fjellman creates an at times gripping story of humanity made inhumane by isolation.

He's aided by composer C.J. Johnson, whose use of strings adds to the dread.

Caged has soft spots, but it delivers on its vision of what isolation can do to the mind.

And the human spirit.