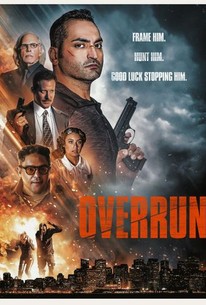 It's hard for a crime film - indie or otherwise - to break into the field, since there is so much access to great international crime television shows on Netflix, Brit Box, etc.

Overrun knows it has to be different, and different it is.

The first part of the film has little or no promise. It seems generic - a nasty little piece of work.

Whom do we root for? Why should we care?

It turns out that the lead actor Omin Zader is just a stolid presence. He's no superhero or even engaging. The only actor with any style or energy at the beginning is Robert Miano who plays underworld crime boss Ray Barren.

Barren assigns Marcus (Zader) to recover a case that is in the possession of a Russian mobster, Arkadi Dubkova (Bruce Dern). It turns out Marcus lost money to Barren, and he has to try and protect his sister Reyna (Chelsey Goldsmith), who is being threatened.

The film gains a little bit of spirit when Marcus gets in multiple battles with foes. Zader was born in Iran, came to Los Angeles with his parents, and has had a successful career as a stuntman. He is credited with 114 stunt appearances in films and on television. He is a master of martial arts.

In Overrun, he breaks into the Russian stronghold and steals the case. At this point the metal case has out-acted most of the actors.

Since Marcus is in possession of the case, and he is framed for killing Arkadi's son, the Russian has put out a bounty for him - a million dollars dead, or two million alive.

This is the point at which the audience decides to quit or agrees to go on a wild ride. The film goes off the rails and becomes a conglomeration of wacky mayhem. There are Russian thugs, corrupt cops, and a bevy of assassins all after Marcus. Killers run amok. Overrun has found its vision.

Although Omin Zader is better known as a stuntman, he is a capable actor in the part of the beleaguered Marcus.

But surprising is the assemblage of veteran actors in Overrun. Robert Miano is effective. William Katt is an old corrupt cop. Katt was a boyfriend in Carrie (1976), and he played Sundance in Richard Lester's Butch and Sundance: The Early Days (1979). His mother Barbara Hale portrayed Della Street in the Perry Mason series, and her son William played investigator Paul Drake, Jr. in 9 episodes.

Nicholas Turturro adds vitality as a technical helper to Marcus.

But the biggest surprise is Bruce Dern. Did he really want to play in an indie? It seems so, since as the Russian he renders a terrific speech about a legendary fable.

Dern also delivers his last line in one of his final films: "Am I an asshole, or what?"

That line seems to capture the ultimate spirit of the film.