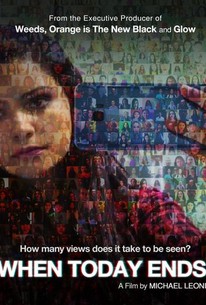 A serious topic deserves to be told seriously. When Today Ends tells its story glibly. And tritely.

When Today Ends is the story of teenagers who commit suicide and why they do. They tell about their lives using the hashtag #WhenTodayEnds. It's appropriate because it is a hash.

The indie film yearns for authenticity, but instead it gets pretension.

Director/writer Michael Leoni can take all of the blame. He throws dialogue into the mouths of shallow characters. One says of teenage suicide that she thinks, "it's really sad. So sad."

Another says, "There's so much sadness in the world. Sometimes I feel I can feel all of it. It's hard to describe." Later she says, "I don't know what I'm saying."

One character has depression, but throws kisses to her multitude of followers online. Another is a hockey player who gets bullied by his teammates. Perhaps the one character of some interest is a transgender teen (Gavin Leatherwood). There is some authenticity to his character. But overall, the characters are one-dimensional.

Director Leoni is not helped by cinematographer Max Feldman, who loves to shoot footage of floors. The camerawork from online footage makes little sense. Much of it couldn't be shot by any of the online speakers. It's above them and beyond them.

But so is the whole film.