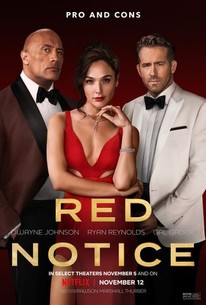 If so, do I have a film for you. It may not even be a good movie, but if you get on its wavelength it's a hoot.

Red Notice, in theaters and on Netflix, is a glib buddy movie full of outrageous action and appealing main characters. Written and directed by Rowson Marshall Thurber, much of the film is spirited nonsense.

It's a long way from Raiders of the Lost Ark, but it bolts on and off a similar path. It pays homage to its predecessor - Ryan Reynolds even whistles the theme from Raiders.

Red Notice is the tale of master art thief Nolan Booth (Reynolds), who is trying to steal three jeweled eggs that were given to Cleopatra. He is pursued by police profiler John Hartley (Dwayne Johnson). Also involved in the frantic quest is a mysterious woman (Gal Gadot).

Much of the banter is silly, but it's smart silliness. It's full of hairy dialogue as when Reynolds asks the bald Johnson, "Why do you wear a hairnet?"

Red Notice may have a twist too many, but they come with the territory.

The rating of Red Notice in rotten tomatoes is informative. The majority of reviewers trash the film. Reviewers give the film 39%. But the public gives it a 93% rating. They got a kick out of it.

The late Dwight Macdonald wrote a classic essay "Masscult and Midcult," in which he divided culture and film into three categories. Masscult was for the vast public: High Culture was the best quality, and Midcult was phony. It's a useful concept.

Red Notice may be flimsy, but it's not phony. It delivers on its promise.

Many audiences seem to appreciate that.