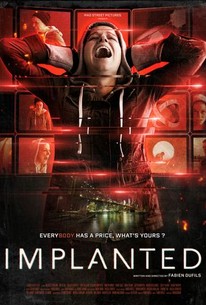 Implanted is a gripping trip into artificial intelligence hell. It's a particularly smart, well made indie film (now shown on Prime Video).

What makes it most meaningful is the exceptional performance by Michelle Girolami as Sarah, a test subject who struggles against a nanochip that wants to take control over her. It's a gruelling battle that it does not seem Sarah can win.

Sarah, with others, signs up with Dynamic Health Care to be implanted with a nanochip, which is supposed to bring her health and happiness. She will be paid $20,000 for her participation. She needs the money to help her ill mother.

At first the implanted nanochip named LEXX (with a female voice) seems to provide her with positive care. But LEXX has a mind of its own. Sarah tries to cancel the program, but LEXX has control and won't let her. It forces her to do things she tries to resist doing. But she can't. "You are now under my control," LEXX says.

This film could easily be superficial, but Michelle Girolami is transcendent. The talented actress has great range. She is captivating, sweet, and optimistic. Then she is desperate, bleary-eyed, overwhelmed and hopeless. She is both vulnerable and feisty.

Michelle Girolami delivers one of the best female performances I've seen this year.

Fabien Dufils - born and raised in France - is director, co-writer, producer, director of photography, and casting director. He is very much an auteur. But casting may be his most significant aspect. Michelle Girolami, with humanity and credibility, carries the film.

Less fortunate is the casting of Sarah's mother. There is little if any chemistry between mother and daughter, although her mother's condition is her major motivation. It's the one relationship that seems listless.

Dufils also is aided greatly by editor Olivier Wicki who helps make the chaos effective. Wicki worked with Bono with U2 3D (2007).

One should keep watching through the end credits. Irony is not dead.

Implanted was shot in New York, Paris, and Las Vegas.

It's settings are international. So is its vision.