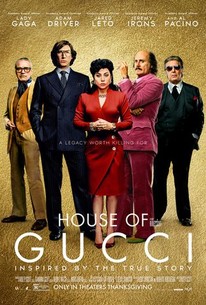 House of Gucci is a stylish, disjointed film.

It's one of those films with no one to root for and no one to relate to. At least as it evolves.

We may start out rooting for Maurizio Gucci (Adam Driver) in his romantic pursuit of Patrizia Regiani (Lady Gaga), but that doesn't last. Conflict and ego become paramount. As the film develops, humanity wanes. It's a costly loss, and the film suffers.

House of Gucci, "inspired by a true story," is hardly inspired. It focuses erratically on the power struggle for the Gucci empire. Patrizia is not of the Gucci class and has to finagle to get power when she joins the family.

The results are dire.

The character of Patrizia is part of the film's problem. She says, "I hate reading. I get bored." Patrizia is ambitious but uninformed. It's hard for an actress to enhance this character.

Lady Gaga as Patrizia does not show the range she did in A Star is Born (2018).

The fact that the character in House of Gucci is one of little depth limits Lady Gaga. She obviously was committed to the character's accent, but that's not enough.

The muddled screenplay by Becky Johnson and Roberto Bentivegna from a book by Sara Gay Forden, does not help.

Director Ridley Scott throws effects against the wall of House of Gucci, but a lot fails to stick.

Stanley Kubrick made films about hollow human beings, but they always had his intelligence. Ridley Scott is no Kubrick.

Adam Driver - smiling more than he ever has in film - gives a solid performance as Maurizio Gucci. Jeremy Irons captures the decaying style and distance of Maurizio's father Rodolfo.

Some of the actors - particularly Al Pacino and Jared Leto - throw themselves against the wall. Pacino is Pacino, as Aldo Gucco, Maurizio's uncle. And Leto retains his patented weirdness as Paolo Gucci.

But Lady Gaga's Patrizia is the main focus.

In a concocted conversation, Scott Fitzgerald supposedly once said to Ernest Hemingway, "The rich are different from you and me." Hemingway responded derisively, "Yes. They have more money."

Maybe Patrizia should have read them.