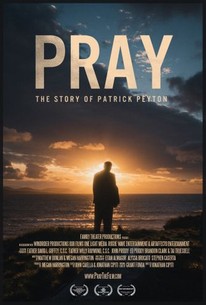 How times have changed.

For many, it obviously was just a one-issue election - abortion. They voted for a twice-divorced, money-changer who assumed the role of populist.

Irony, your name is Catholicism.

Pray: The Story of Patrick Peyton - an independent documentary directed by Jonathan Cipiti - takes us back to another time and another phenomenon. It relates the story of the Rosary Priest (Peyton) - who lived a life of total commitment to the cause of the Virgin Mary, the Rosary, and Family Prayer. He had a remarkable life of international scope.

Patrick Peyton (1909-1992) was born in Ireland, the 6th of 9 children. Obviously, his parents were Catholic. Despite living in poverty, his father gathered his entire family together every night to pray the rosary. It was an activity that Patrick promoted all his life.

When he was a young man, he and his brother traveled to the United States and lived in Scranton, Pennsylvania (until he was ten Joe Biden grew up in Scranton).

Patrick got tuberculosis, but believed that his devotion to the Virgin Mary saved his life. In 1941 he was ordained at Notre Dame in the Holy Cross order.

Peyton went to Albany, New York, where he originated a local radio program, espousing his faith in Family and prayer. Eventually, he went to Hollywood to try to enlist stars to support a national radio show. He had great personal success in enlisting Bing Crosby, Frank Sinatra, Ann Blyth, Loretta Young, Lucille Ball, Maureen O'Hara, et al to his cause.

In 1951 Father Peyton added Family Theater to television, and he hosted the tv version. On Easter Sunday in 1951 James Dean starred as John the Apostle, in his first professional acting job after a commercial.

"I'm for prayer," said Peyton, "Family prayer. The world hasn't got a prayer without yours."

Father Peyton had Rosary rallies in Manila, Asia, India, Bangladesh. In 1961, he drew half a million people to Golden Gate Park in San Francisco. In 1962 his Rosary crusade drew one million people to Colombia and 1.5 million to Rio de Janeiro. In 1964, he drew 2 million in Sao Paulo, Brazil. And in 1985 he drew 2 million to the Philippines, when expectations were uncertain.

Father Peyton said he was ecumenical. All religions were invited to support the concept of prayer and family life.

I half-expected Pray: The Story of Patrick Peyton to be in Latin. It's a niche film.

But It could have an ecumenical audience.