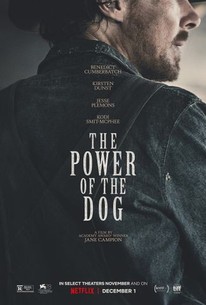 The Power of the Dog (on Netflix and at theaters) is a provocative, challenging film.

It's the most ambiguous of films until the end. Where's it going? It's twist-and-turn cinema.

Several reviewers suggest a second screening, that rewards the viewer who now better knows what to look for. The Power of the Dog has levels and depths that should be plumbed.

She cinematically creates an evocative, enigmatic portrait of desolate struggle for survival and identity in 1925 Montana. The theme of homosexuality simmers throughout. When the book was first published, most reviewers avoided the topic.

The Power of the Dog is the harsh tale of two wealthy brothers who own a cattle ranch at a time the world was changing. The older brother Phil (Benedict Cumberbatch) clings to the past. He has a persona that is mean-spirited and dominating. He is an intelligent bully. The cowboys look up to him as a powerful leader.

At the end of a cattle drive the cowboys gather for a dinner at a small restaurant owned by a widow Rose (Kirsten Dunst). Phil mocks her and her teenage son Peter (Kodi Smit-McPhee).

But the younger brother George (Jesse Plemons) is smitten by her. He returns to town and marries her. They move back to the brothers' ranch. Phil sets out to destroy Rose, and he continually insults Peter, calling him "sissy." Phil drives Rose to drink with his cruel manipulation.

Peter has plans of his own, though they remain nebulous.

Jane Campion knows that the landscape is a character in the book and movie. It could be titled The Power of the Brokeback Mountain Dog. She photographed the film in her native land of New Zealand. Her cinematographer Ari Wegner used muted brown on the expanse of land to effectively replicate Montana.

Benedict Cumberbatch is potent as the egotistical, sometimes menacing Phil. Jesse Plemons is convincing as George, the staid, stocky brother, who falls in love with Rose. Kirsten Dunst as Rose gives a multi-leveled performance.

Although Phil is only two years older than George, in reality Cumberbatch (age 45) and Plemons (age 33) are twelve years apart. But that's no problem.

Plemons and Dunst make a suitable couple in the film, though she is six years older. In reality Plemons and Dunst are not married, but they had their second child together this year. Their personal relationship may add to the credibility of their roles in the film.

In some memorable ways Campion - with editor Peter Sciberras - seems to pay homage to Thomas Savage's book. His book is full of long sentences - some of them 10, 11, or 12 lines long. The key revelation in the last line of the book is 7 lines.

She creates a similar style with long shots without cuts. The lengthy literary and film passages both render stylistic effect.

Campion makes judicious cuts of material from the book; e.g., the descriptions of the experiences of Rose's first husband.

The book's ending is much more overt than the film's. Campion has a different focus at the end, and she changes the emphasis.

Both Campion and Savage have achieved closure in their art.

Both deserve to have their work taught and considered in a brilliant tandem.