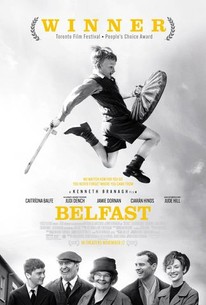 Belfast is a well-made film, in which Branagh pays homage to himself.

Belfast is a semi-autobiographical film based on Branagh's youth as a nine- year-old in 1969 in a Northern Ireland rife with bloody conflict between Protestants and Roman Catholics.

In casting the young boy based on him, supposedly the casting directors met with 300 potential Buddys.

I doubt whether any of us would have tried to cast an "adorable" child to play us. We'd probably have wanted someone with more reality and humanity...

Jude Hill is as cute as a button. I use the cliche, because the image is contrived. The character is very, very clean.

Hill is the image of spry innocence. Hill has wide eyes and a round face. He mugs a lot.

One's acceptance of the film probably depends on how much you accept Jude Hill. The studio is promoting him as their leading actor for the Best Actor Oscar. Yikes.

The cast is full of excellent actors - Judi Dench as the grandma, Ciaran Hinds as the grandpa, and Jamie Dornan as Pa. But the most credible performance is by Caitrioni Balfe as Ma. She brings needed humility and strength to the role.

Branagh could use a writer such as Sioban Bryne O'Connor who has written 44 episodes for television's Blue Bloods. She has a gift for capturing family in a human, believable way. Branagh needs a dash more of that.

The black and white and aerial cinematography bring a quality of distance in time and place to Belfast. The music by Van Morrison and emphasis on the sax add to the evocative quality.

Although Belfast begins with color cinematography, it quickly moves to black and white. Then the only color is when Buddy sees movies that are in color in theaters.

It appears that Branagh was influenced by westerns and especially John Ford. Buddy sees Ford's The Man Who Shot Liberty Valance (1962) on television. Buddy and his family also liked fantasy films which they saw in theaters.

Reality is not one of the film's strengths.

The film could be titled Chitty Chitty Bang Bang in Belfast, Ireland.