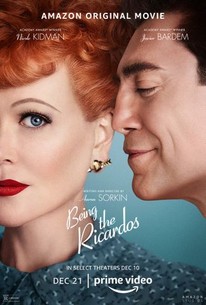 Being the Ricardos is an intriguing biopic.

Since it is Sorkin, it may seem all over the place. But given it is Sorkin, the language is smart and the characters are engaging.

And the film will reveal some actual events that you don't know about - such as who actually talked on the phone to an audience about whether or not Lucille Ball was guilty of being a communist.

Since there is so much stuffed into Being the Ricardos, the audience has to be willing to take a sometimes bumpy road.

The film takes place basically in a week, although what happened in actuality was not in just a week. But that's creative license.

Its strong points are the acting of the four main characters and the dialogue they are given. Nicole Kidman may not seem an appropriate Lucy, but she is. Kidman humanizes her. She is not as crass as the persona of Lucille Ball, but she captures her savvy and intelligence.

The film shows how much of a perfectionist Lucy was, and that she had a special ability in constructing a scene. The film includes the clever device of Lucy seeing the performance process in her mind. She was a phenomenon.

Like her former husband Tom Cruise, Nicole Kidman is an underrated performer.

Javier Bardem has appeal and credibility as Desi Arnaz. Arnaz had a gift for business and for influencing important people. Bardem brings gravitas to the character.

J.K Simmons is terrific as William Frawley, who played Fred Mertz, and Nina Arianda is believable as Vivian Vance, an attractive woman - who in the role of Ethel Mertz - had to put on weight and play frumpy. In the film, it is an issue for Vance.

Many of the sequences in the film are memorable. But there are two that the discerning Lucy would reject. There is a scene in the latter part of the film where Lucille Ball faces a table of businessmen who want her to be on television. Lucy would say, "Aaron, why go back late in the film to the beginning of my television career? It doesn't fit there. It stops the momentum of the film." And she would reject the scene where Lucy finds two handkerchiefs with lipstick smears in Desi's pocket. She would say, "Aaron, c'mon, that's trite."

But despite its glitches, Lucy should be pleased.

Because of its acting and the tangy dialogue, Being the Ricardos prevails.