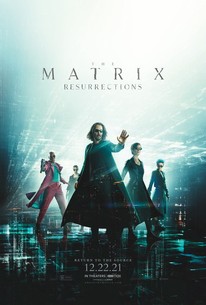 The Matrix Resurrections is a minefield for critics.

There are several potential audiences for the film. There are the loyal fans of the original, who demand it prove itself. Many of them do not like the repeated footage from the past. Been there, done that.

Then there is the general audience which expects action and more action, and upside down action.

And the trans audience knows how much director Lana Wachowski has been telling their story.

Now there is the new audience which is introducing itself to the franchise.

The Matrix Resurrections is more accessible than the past films because it's on HBO Max as well as theaters. Footage from the past will be helpful to them.

Whatever the various audiences expect from the film, there is one factor that should appeal to all. Despite abstruse experiences, enigmatic characters, and disparate themes, there is a quality that should transcend everything. The Matrix Resurrections is a love story.

Yes, Neo (Keanu Reeves) and Trinity (Carrie-Anne Moss) are back from the dead.

But in The Matrix Resurrections, their chemistry is still evolving. It has freshness and depth.

In his gifted performance, Keanu Reeves exhibits a palpable sadness. He captures the sense of loss. His character's commitment to love holds the film together. And Carrie-Anne Moss's character is an apt object of his mission. It is their mission.

The film continues the theme of fate versus choice. When fate is in control, choice disappears. But in The Matrix Resurrections, the characters are given a "second chance."

The film ends with a hopeful leap.

The conclusions of films can ruin them. Recently, Condor - a two-year series on television - had its conclusion. Most of the time it was brilliant and engrossing. But in the last episode it squandered its credibility. It just threw bodies at the kitchen sink. It gave up humanity for contrivance. So the series had a lifeless conclusion.

Endings reverberate back through the previous work.

The conclusion of The Matrix Resurrections reverberates back through the past.

It enhances its humanity.