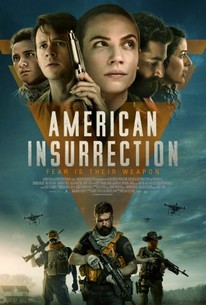 I wish the indie film American Insurrection had kept its original title, The Volunteers.

I almost avoided the film because of its later title, because of the political emphasis. But at its best American Insurrection transcends its politics.

The film's strength is that it humanizes its subject. It's a film about the search for identity and the struggle for survival. And the power of strong women.

The actors give effective performances, and the dialogue is credible.

The plot takes place in a society that is controlled by white supremacists. They have elected a President who appears on a television interview show in which he speaks "reasonable," smooth talk, including his policy of forgiving student loans. The cameo is played by Toby Leonard Moore who was excellent in the television show Condor.

The President has a militia, orange-shirted Volunteers, although he rejects the term militia. They give people who are different from them barcodes on their necks. Some of the militia have become hunters of the people they don't accept.

Four characters are hiding out in a cabin waiting to get coordinates over their radio to escape to Canada. The have chained a right-wing Afghan war veteran in his barn, because they know he would turn them over to the Volunteers who would torture and kill them.

The four are joined by a fleeing gay man Arjay (Brandon Perea), who Sarah (Sarah Wharton) has saved in a violent encounter.

Sarah is the leader of the group. Her husband is Jarret (Jarret Kerr is the actress's actual husband and co-authored the screenplay with director William Sullivan). It's ironic that he is the least credible character.

Also in the secreted group are David (Nick Westrate) and his Muslim wife Zabi (Nadine Malouf).

The most human element in the film is the evolving relationship between Zabi and Gabe (Michael Raymond-James), who is chained in the barn. Their dialogue is credible and moving.

Unfortunately, when the men take over the film flounders and loses its humanity. It veers into creative chaos.

At the end the women assert themselves again, but a lot has been lost in the kitchen sink.

American Insurrection is uneven, and squanders its potential.

But when it is at its most human and credible, it is worthy.