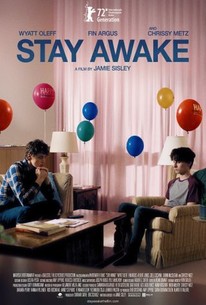 Stay Awake is a quality indie fiction film about the life-changing effects of addiction on a family.

Writer/director Jamie Sisley expanded his award-winning short film Stay Awake (2005) into a full-length feature. It's an expansion of his own personal family journey.

Stay Awake is the story of two teenage brothers, Derek (Fin Argus) and his younger brother Ethan (Wyatt Oleff). They live with their mother (Chrissy Metz) in a small town in Virginia. The two siblings have promising futures - Ethan is accepted into the Ivy League university Brown on a full scholarship. Derek is a blossoming regional commercial actor.

But their mother is severely addicted to drugs, and keeps derailing their potential. She overdoses again and again. Each time is an emergency, and they have to rush her to the hospital. They are committed to taking care of her, above all else. It takes a heavy toll.

She undergoes therapy, but to little or no effect. But her behavior puts her sons on a perpetual hamster wheel of futility. They aren't able to get off.

Chrissy Metz (This Is Us) does well with an essentially one-dimensional role. The film is most effectively carried by Fin Argus and Wyatt Oleff. They even look like brothers, and they share a natural quality that invests the film with humanity and sensitivity.

Writer/director Sisley seems to want to have it both ways. He wants the brothers to evolve, but only so far. He stalls the brothers' evolution, and has the mother's de ja vu status dominate.

It's ironic, because Sisley himself went on to be educated at Columbia in New York.

In an odd choice, Sisley has Ethan change from a potential English major into a student who plans to take chemistry and biology. As a lifelong English major, I'd tell Ethan to stay with the English major.

Perhaps, it's a contemporary choice. In 2022, almost all the ads for universities today feature students in labs and playing sports. Nary a book.

Stay Awake has engaging actors, and is disquieting.

In regard to the addiction, Sisley seems to say, "Live with it."