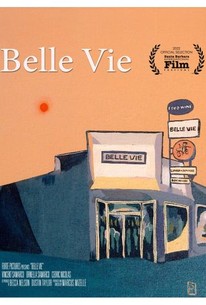 Belle Vie is an indie about French restaurateur Vincent Samarco's struggle to create a bistro in Los Angeles. He does, and then the COVID-19 pandemic strikes.

Samarco is faced with relentless obstacles to his bistro, but he retains his humanity despite the negative results. He has to be able to cope with the American Dream going bankrupt.

Corporations have co-opted the "dream." Many corporations prospered during the pandemic; at the cost of small businesses such as Belle Vie. At the end McDonald's stands tall nearby Belle Vie. God Bless America.

The bistro Belle Vie is a symbol of what has been lost during COVID-19. It was a quality, personal, creative business that represented tradition and community. It was not corporate.

Samarco says, "I like building stuff. It's very fulfilling." He also says, "We need to socialize." Those were his standards.

As he looks at his empty walls, Samarco declares, ""I'm sad for the community, more than I'm sad for myself."

Belle Vie is an anthem of decency.

Director Marcus Mizelle captures the humanity of the restaurateur and his environment. The only misstep is after the credits in a coy segment that takes the emphasis off Belle Vie. [But that happens today. The Oscars' "In Memoriam" had no film clips. It was dancing and singing. If you want to see how it should be done watch SAG's "In Memoriam" on U-Tube. It has wonderfully relevant film clips.]

One of the most effective sequences in Belle Vie is a phone call between Vincent and his grandpa. There's footage of the old man in the South of France. His grandpa says, "I want to be around people who are smarter than me."

The humility and aspirations have been passed down through generations.