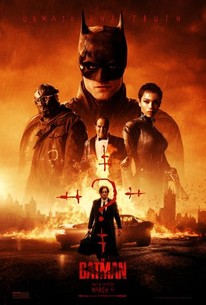 In 2017 I was reluctant to see director Matt Reeves' War for the Planet of the Apes, because it was going to be brutal and too long. I had no positive expectations.

Five years later, I had not learned my lessons. I avoided Reeves' The Batman, because it was going to be brutal and too long. Also, it seemed to offer only endless, gloomy darkness. There was little if any appeal to it.

Boy, was I wrong. As War for the Planet of the Apes transcended my meager expectations, The Batman vaulted to artistic levels I never expected.

One has to gird himself or herself and leap headlong into its long, laborious wavelength. Only then can one experience the values of its palpable, wet darkness. Only then can one contemplate the challenging, perplexing visions. The Batman delivers on multiple levels.

Perhaps the most important one is Reeves' potent sense of empathy. It may take an arduous odyssey to get there, but it is captured in an image of The Batman's salvation of the human race, leading them out of the literally/symbolically flooded Gotham, and carrying a human in his arms as a throng follows him.

Ultimately, The Batman, amidst the corruption and horror, has heart. It's an inviolate discovery.

Reeves has called The Batman a "detective story" in which "Gotham had to be a character."

Both The Batman and Harry Callahan can never transcend their alienation. And both were Christ figures. "Jesus" is mentioned around The Batman. Of course, if Christ came back today, he'd be crucified by "Christians."

Cinematographer Greig Fraser is crucial in helping create Gotham City as a character. The Batman is full of iconic visuals. Ugly beauty is the nature of The Batman.

The cast - at times phenomenally - brings to life human nature in all its bubbling, crass darkness.

Pattinson, with stoic power, captures the struggle of Bruce Wayne/The Batman, trying to cope with his legacy, the history of his wealthy powerful father and mysterious mother. What is he to do with his incredible wealth? How should he help the police, especially detective Jim Gordon (Jeffrey Wright).

Also, memorable are Paul Dano as The Riddler, Colin Farrell as The Penguin, and John Turturro as Carmine Falcone.

There is a vulnerable chemistry between The Batman and Catwoman. The Batman is a combination of vengeance and vulnerability.

So there has to be a calculation for both.

The Batman emphasizes the social vulnerability of the hero.

In a key scene, The Batman and Catwoman drive together on vehicles down a road, through a tunnel, and to a crossroads.

His last words to her were, "Take care of yourself."

In a world of corrupt systems and fallible humanity, we want more.

But that may be all you can have.