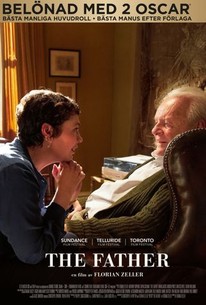 In a world of Marvel and Sci-fi formulas, occasionally personal films still exist. But often they're missed or forgotten.

If I was to say that in 2021 at 93rd Academy Awards a film was nominated for 6 Oscars and won 2, including Best Actor and Best Adapted Screenplay plus a nomination for Best Supporting Actress, would you draw a blank? Most people would. You can win some bets by asking people around you what the picture was and who the 2 actors were.

It was only a year and a half ago.

The film was The Father, and it deserves recognition and appreciation. The Oscars went to Anthony Hopkins for Actor, and screenwriters Christopher Hampton and writer/director Florian Zeller. Olivia Colman got a nomination for Supporting Actress.

The Father is a quality, challenging film. It was adapted from a play by Frenchman Zeller. The play was successful in Paris, London, and on Broadway, where Frank Langella won a Tony for his performance.

On first perception, the film may not draw attention. It is about a man (Anthony Hopkins) who has dementia and his relationship with his daughter (Olivia Colman). It seems like it may be a niche film, with little general appeal.

But it goes far beyond being a niche film.

Along with the outstanding, sensitive performances, the set is a character. It may take a while to realize how influential it is. As the leading character Anthony faces confusion, deterioration, and lack of coherence and unity, the setting goes through subtle changes in furnishings, placement, and color. We aren't sure where we are and who is there. In a sense we join the character in his uncertain misplacement.

Director Florian Zeller has said he wouldn't have made the film without Hopkins. The screenplay makes some changes that increase the relevance of Hopkins. The name of his character is changed from Andre to Anthony, and when the character says the date of his birth it is December 31, 1937, which is the same as Hopkins.

Anthony Hopkins was born on the last day of 1937.

In The Father Hopkins gives a memorable performance of charm, rage, moments of glee, confusion, and sobbing surrender.