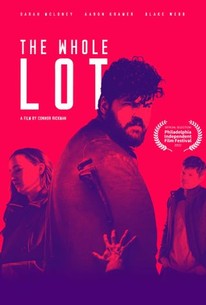 For most of its 75-minute running time, the indie The Whole Lot is credible.

But for some reason its writer Matthew Ivan Bennett and director Connor Rickman reach for a "suspend your disbelief" moment,

It's difficult to make a dysfunctional family credible, but the two filmmakers do. Then they take the leap into contrivance. They don't earn the sudden change.

The reviewers shie away from mentioning the moment specifically. I assume they don't want to be spoilers, but the action is crucial and mars the credibility the filmmakers have established. Most viewers, who have related to some of the film, may not relate to the rest. The barn is out of left field. The kitchen sink is present.

Playwright Tennessee Williams was one of the few writers who was able to take dysfunctional family members and effectively go beyond their psyches. The sudden lurch by Bennett and Rickman seems to be because of lack of confidence in what they have established.

It's no wonder The Whole Lot had its premiere not in its native Utah but in Philadelphia, the "City of Brotherly Love." It premiered on the last night of the 2022 Philadelphia Independent Film Festival.

The Whole Lot is basically a three-character drama. (A fourth drives one of them to the meeting. Then leaves.) The set is a barn in snowy Utah, with icicles hanging from the roof and pieces of torn curtains outside a window.

The main character is Della (Sarah McLoney), whose baby son has died, leaving her vulnerable. She is joined by her husband Eli (Blake Webb) and her brother Jamie (Aaron Kramer), a bearded, husky, hulk of a man.

They have arrived at the barn in which the father of Della and Jamie has hung himself. The barn contains a large, valuable collection of classic cars, which the father had gathered and taken care of.

Della was appointed executor of the father's will which said she was not to give Jamie too much that she couldn't control his reckless, irresponsible ways. She offers him only one of the cars, which should pay for his education.

The three characters are unlikable. That's ok. But then they become unbelievable.

For most of the film, they are credible. Jamie - like his absent mother - is an addict. The mother is "in recovery in New Mexico." Jamie is pretentious, entitled, and "psycho." Mustachioed Eli is a self-serving "investor" who is after money. Della lacks control.

The plot of The Whole Lot puts an old Edsel amidst the fine cars.