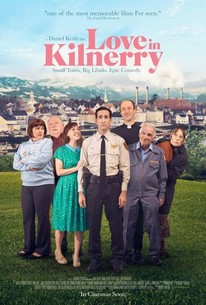 The indie Love in Kilnerry should have been made in Hampshire, England, not in New Hampshire, USA.

The British directors have a gift for comedy-dramas set in a town -- e.g., Kinky Boots (2005) and Billy Elliot (2000). They particularly utilize credibility in their execution.

Daniel Keith wrote, directed and played a leading part in Love in Kilnerry.

Ironically he did not create the music -- which is the worst part of the film. It is intrusive and overblown.

Love in Kilnerry started as a play. The film would be better without music.

The plot is clever. A chemical -- P172 -- that the Environmental Protection Agency -- puts in the water on Kilnerry has a drastic side effect. It effects the libido of the entire town. [The ending is very predictable.]

It's a good idea, but it leaves out wit and charm, which would have been staples for the Brits.

The characters are noisy but forgettable. The only actor one might remember is Tony Triano, who plays the mayor. But that's because the character is so annoying.

Daniel Keith has to carry the film.

It's a heavy lift.