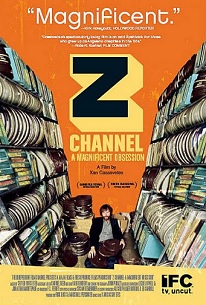 Z Channel: A Magnificent Obsession [now on Prime] brings a time, place, and attitude back to vibrant life.

Many of us don't live in the past. It loses its impact, and we may forget the value of our past experiences.

I lived through a time when film became recognized as having personal creative depth. It could be an art form and not merely escapist entertainment. Alfred Hitchcock was once considered one-dimensional -- only a director of thrillers. His vision was unrecognized.

Even today, most people hardly recognize the director. Most know Hitch and Spielberg, and maybe one of two others. Most directors remain unrecognized. But the committed lovers of film realize that unlocking the filmmaker's vision is the key to understanding.

Unlike today, 50 years ago film was taught only at a few universities -- USC, NYU, and a couple of others.

At the time I was one of only two educators included in the preeminent English film magazine Sight and Sound's decadal international poll. I also founded and edited a film journal Film Heritage for a dozen years. This gave me some crucial access.

I never knew of Z Channel -- a remote cable television channel in California. It showed first-run movies before and shortly after their theatrical release. It gave audiences an opportunity to see films they would never have gone to. They showed them without commercials.

It was a remarkable phenomenon.

But one time he had a significant influence on my life. He was the programmer for the Beverly Canon Theater in Los Angeles. He got Sam Peckinpah to bring his own copy of the uncut version of The Wild Bunch (1969). I stood in a line in the rain to see it. I think it was the only time I've stood like that in a line.

It was the first time I met Sam. I told him I was a friend of director Tom Gries. "Is Tommy here?" he asked. No, but Sam agreed to have an interview with me some time. Later we did.

Z Channel: A Magnificent Obsession shows that Jerry Harvey was manic, volatile, self-destructive, and could be dangerous. But he was completely devoted to film.

He served filmmakers as no one else would or could. He understood that many filmmakers were visionary, and the system thwarted them and often destroyed their work. It never got seen in its true form. It was cut and maimed.

Robert Altman says, "When McCabe and Mrs. Miller came out, it was a flop...Jerry said, 'I'm going to sneak your film on my channel.'" That was career-changing, because as Altman says, "Otherwise they didn't play it anywhere."

Jerry Harvey got viewers for Altman. The rest is history.

Bob Altman was one of my closest acquaintances in film. At a press conference in New York for Buffalo Bill and the Indians (1976), I suggested the ending didn't work. Days later on the phone, Bob told me they had changed the ending.

Jerry Harvey rescued several films that were butchered, or ignored, or held in contempt.

When Michael Cimino's Heaven's Gate (1981) was released, it was critically savaged. Later Jerry showed the original 5-hour version on Z Channel, and it was reborn after being stillborn. It was a revelation.

Sergio Leone's Once Upon a Time in America (1984) was another film that was taken away from the director and massacred. Ultimately, Jerry showed the complete version, which the callow editing had ruined. James Woods talks about the resurrection of the original. Jerry showed both versions on Z channel, which showed the vast superiority of Leone's version.

Wood also speaks about Oliver Stone's Salvadore (1986), which was ignored, but which Jerry supported and got an interview for Woods with the L.A Times' s Charles Champlin. Woods says it saved his career and he received a Best Actor nomination.

He showed the 5-hour version of Bertolucci's 1900 (1976), which restored its scope and depth that had been cut in the theatrical release.

And he showed the restored version of Visconti's The Leopard (1963), which recovered its depth and wonder.

Of the Z channel's showing of European films, critic F.X. Fenney says, "They programmed them well. And they got a hit with them.". Fenney also said, "If you appeal to the most intelligent member of the audience, everybody follows along." Not in 2022.

And Altman says, Jerry Harvey and the Z channel provided "a living nurturing" that provided attention "that otherwise would have been lost forever."

Director Henry Jaglom says, it was "like having a film festival in your house."

Z Channel: A Magnificent Obsession is directed capably by Xan Cassavetes. Her parents would be proud. She is the daughter of actress Gena Rowlands and filmmaker John Cassavetes. I had a terrific interview with the divine Gena.

I once was walking through the cemetery in Westwood, California, when I looked down. I was walking on the grave of John. Cassavetes. I didn't even know he had passed.

It's a world of poignant memories.

Near the end of Z Channel: A Magnificent Obsession, we hear of a happy celebratory dinner that gathered Cimino, Fenney, Jack Harvey and his wife Deri.

She got a beautiful cake with icing with words from John Ford's She Wore a Yellow Ribbon. "Lest We Forget."