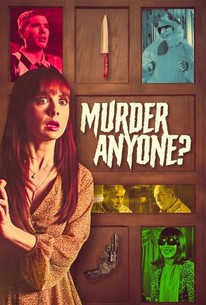 It's an indie film that at the beginning offers a clever premise.

Two middle-aged writers - George (Maurice LaMarche) and Charlie (Charles M. Howell IV) - are in George's basement working on a manuscript. Charlie wants it to be a play, but George wants it to be a movie. Its two writers represent art versus commerce.

Unfortunately, the writers are not given an effective script. Murder, Anyone? turns out to be a strained, awkward melange.

The actors in their play/film don't help. LaMarche and Howell are natural, but the others are artificial.

The production that the duo is writing is in color, while the writers' footage is in black and white.

What softens Murder, Anyone? is that it is director James Cullen Bressacks's tribute to his late father Gordon. James adapts his father's play which actually reached the stage.

But George delivers the most ironic line in Murder, Anyone?

He says to Charlie, "This is just bad writing."