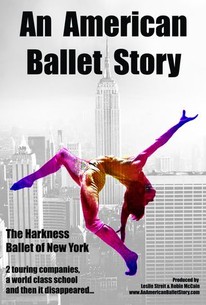 An American Ballet Story is an indie documentary about the evolution - the rise and fall - of Rebekah Harkness and the Harkness Ballet in New York City and around the world.

It's not just for balletomanes.

It's about the world of dance - struggle, grace, creativity, and commerce. It has an abundance of interviews with Rebekah Harkness, dancers, directors, choreographers, teachers, trainees, et al. They come from a special world.

Director Leslie Streit captures the range and depth of that world.

An American Ballet Story asks the question, "who owns the arts?" And how much control should they have?

After her second husband died and left Rebekah with a fortune, she gave crucial financial support to the Robert Joffrey Ballet. But eventually she wanted to have her name replace Joffrey's at the top of the company. He balked and walked away.

In 1964 she established the Harkness Ballet.

She bothered some critics, especially Clive Barnes of the New York Times. He was a friend of Joffrey, and he attacked Rebekah for lack of taste and lack of talent. He became a consistent enemy of Harkness. It marred her reputation.

But she set about building the Harkness Ballet. Joan Finkelstein - dancer and member of the Board of Trustees at the Harkness Foundation for Dance - says, "Rebekah Harkness was the great American Dance patron. She was forward thinking."

Under her control, Harkness created the Harkness Ballet, two international touring companies, a youth ballet with its own company, and even a theater on Broadway just for dance. A dancer says one international tour was "1,000 years," they went to so many countries and had such memorable experiences.

But conflict always seemed present. At one brief point they went through six directors. But many of those being interviewed speak about how a challenging, exciting new world opened for them with the Harkness Ballet.

One limitation of the film is that many of the interviews are only oral - there is no footage of the speaker. Instead there is a dance, people strolling, some activity is on the screen. Much of that footage is negligible.

But there are images that are compelling. Salvador Dali in Barcelona shows him as a wild eccentric. He adds spice to the film.

The film avoids any mention of the extravagant indulgence that was a major characteristic of Rebekah's character.

Though most of the film is about the Harkness Ballet's development, it also shows its demise and Rebekah's decline. Her money came from oil, and when in the 1970s the industry collapsed her fortune took a fatal blow.

Although at times the film is rocky, it has its compelling moments.

Near the end Margo Sappington, who was choreographer and actress, talks about doing research for her performance in the short ballet, Rodin mis en vie (1976).

That is the power of dance.