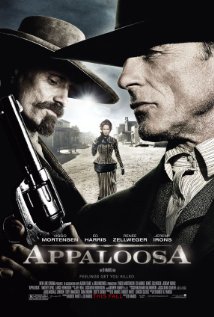 I give thanks for westerns.

Every time they seem to be about to gasp their last, dusty breath, one comes along to give them a bit of renewed life. Bless it, the western genre will not die. Last year it was the excellent remake 3:10 to Yuma.

This year it's the worthy Appaloosa.

For years the western genre has been in steady decline; its loss of influence is only rivaled by that of the Republican Party. What would John Wayne, John Ford and Ward Bond -- all stalwart right-wingers -- think?

John Wayne would remember one of his minor movies, North to Alaska, and shake his head in disbelief.

One positive quality that a western has is that it can draw on a tremendously rich tradition, even though it may be well-trod.

It's unlikely that the western will ever find many new paths; the traditional ones are so deep and worn. But there's still the possibility of creativity.

Appaloosa has a standard plot of two lawmen in 1882 who are hired to save a town (Appaloosa) that has been nearly destroyed by a willful rancher and his hired thugs. Nothing new there.

The despotic rancher Bragg (Jeremy Irons) is captured and held for trial by the two lawmen Virgil Cole (Ed Harris) and Everett Hitch (Viggo Mortensen). Nothing new there.

Allison French (Renee Zellweger), a widow, comes to town, and Virgil fancies her. Nothing new there. So far it all sounds pretty rote and generic. So where does the creativity come in?

First of all, Appaloosa employs its traditions expertly. The town and its New Mexico environs are photographed wonderfully by Dean Semler. Some of the shots seems like enduring moments of time from the Old West. When Virgil sits with his feet up on a railing, it evokes echoes of John Ford's My Darling Clementine. Other parts of Appaloosa may remind one of Howard Hawks's classic Rio Bravo and the ending has reverberations from George Stevens' classic Shane.

Appaloosa seems very much connected with the past. There also are playful touches such as the somewhat good guy Virgil wearing a black hat. There are several amusing bits of action and dialogue in the movie.

Appaloosa has more quiet conversation than any western ever. The two lawmen have their priorities. They finish their coffee before they go seeking action. The two aging, experienced, laidback friends are taciturn but verbal. They talk about love, loyalty, language, life. And feelings.

"Feelings get you killed," says Virgil. Not always.

There are some missteps. Virgil often struggles for a word, and Everett always provides the exact word. It may be a good idea, but it's not well executed; it seems contrived.

Appaloosa, unlike most westerns, also is a love story, but not like the sappy love in Open Range in which Kevin Costner almost killed the western with the line, "I want to give you one thousand kisses."

Allison French is fickle, flirty and pragmatic. When Virgil falls for her on first sight, it stretches credibility.

Ed Harris, who helmed Pollack directs Appaloosa with visible fondness. He co-wrote the screenplay with Robert Knott from a novel by Robert B. Parker.

Harris stars as the intrepid Virgil, and Mortensen is marvelous as the loyal deputy Everett. Harris and Mortensen work beautifully together; their rapport is nuanced and human. Their weathered visages speak more than words. They are the Old West embodied.

Zellweger has less success, but her role of Allison is more difficult. She is like a Cheshire cat avoiding rocking chairs.

Irons knows how to exude villainy; he was the bad guy in Die Hard: With a Vengeance. As Bragg, Irons is an amalgam of charm and nastiness.

The vision of Ed Harris prevails. Seeing Appaloosa is like revisiting an old haunt with misty eyes. You can go home again -- to the Old West. It's quite a sight.