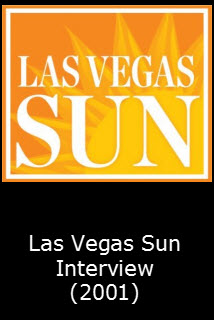 Tony Macklin created a quarterly magazine in 1965 for film buffs that turned out to be a chronicle of the golden age of motion pictures in the '60s and '70s.

"Of course, we did't know at the time it was the golden age." Macklin 63, said in a recent interview. The more traditional golden age is the '30s and 40s, but Macklin believes it to be the later years.

Last year the retired professor collected 23 interviews that appeared in Film Heritage magazine and published them in Voices from the Set (Scarecrow Press, $39.50).

"The '70s were a great age for film", Macklin said. "So many people today are tying to make Steven Soderbergh (Academy Award-winning director of the film Traffic) to be great, but he's no Hitchcock or (Mantin) Scorese or (Francis Ford) Coppola."

Many of the names in the 327-page book are among the elite of the film industry -- not only actors and directors, but producers, writers, film editors, costurne designers and others.

While editing his magazine, Macklin was a professor of English and film at the University of Dayton, Ohio. Film Heritage lasted 13 years, from 1965-78. He said he grew tired of the quarterly and ceased publication.

Macklin taught at the university for 38 years. In addition to English, he taught courses on Hitchcock and Clint Eastwood.

Macklin said he sees a lot of similarities between literature and film. "I found in films the same things I found in literature -- the great vision, the bravery, the insight."

Born and reared in Philadelphia, Macklin said when he was growing up he had a passion for movies and spent Friday and Saturday nights at theaters.

After graduating from Villanova (Pa.) University in 1963 with a degree in English, Macklin began teaching at Dayton.

He said he started Film Heritage because at the time there were only a couple of magazines devoted to analyzing films.

"There was Film Quarterly out of Berkeley (Calif.) and Film Comment out of New York City," Macklin said. "That was it."

Each issue of Film Heritage, which had a circulation of about 2,000, included one question-and-answer feature with a prominent person in the film industry, and a number of articles.

"The articles were much more than critiques or reviews," Macklin said. "They were interpretive pieces.

"I published more on Hitchcock than anyone else."

Hitchcock is the subject of the first article in Voices The interview took place in 1976 on the set of Family Plot, which tiuned out to be the famed director's final film. Hitchcock died in 1980.

A 1975 interview with late director Peckinpah (Wild Bunch) is laced with obscenities uttered by the man who was known for his acerbic personality and his outspokenness.

Peckinpah told Macklin he liked the storyline of director John Ford's film, The Searchers, but he called the movie "One of Ford's worst.

"Mr. Ford and I differed on several views. That was a picture I really wanted to do. I just didn't agree with his approach to it."

Although Macklin interviewed some of the industry giants, one of his favorite contacts was with Huntz Hall, who played Sateh in the Bowery Boys series of movies.

"I loved the 'Bowery Boys.' One of the great experiences of my life was talking to Sabch on the telephone (in 1974)," Macklin said.

Macklin said the conversation was informal and didn't turn into an interview.

"He had just lost his daughter and was upset," Macklin said.

He said another fond memory was a note Wayne sent to him after an interview.

The magazine opened doors for Macklin.

"I got to go on junkets and interview a lot of stars", he said. "I used to go to the New York Film Festival at a time when film festivals were not as big as they are today."

Macklin spent a lot of time in California, where he interviewed such luminaries as Wayne and director Hawks.

"I was all set to go interview Hawks when Wayne's people called me and told me Wayne was available for an interview," Macklin said. "I called Hawks and told him my dilemma and Hawks said, 'You can interview me anytime. Go see the Duke. He's hard to reach.'"

There were plenty of interviews he didn't get, such as one with Jack Nicholson.

"I had an interview set up and then People magazine came out with a bad piece on him and he wouldn't talk to the press."

Macklin said he was born at the right time in see some of the greatest films ever made and to interview people involved with them.

"Film was just being recognized as a burgeoning art form."