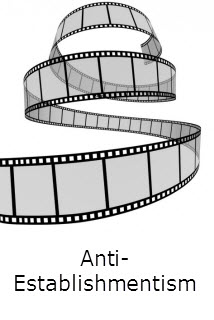 40 years ago, one of the major values flourishing in our society was anti-Establishmentism -- the fervent opposition to the social and political establishment. A lot of people were critical of institutions; they not only questioned authority -- they resisted it. A lot of people.

In 1967 when Mike Nichols' movie The Graduate was released, it was a touchstone of anti-Establishmentism, debunking the "plastic" business ethic and irreverent about suburban mores. When Ben Braddock (Dustin Hoffman) barred a church door with a big cross and fled with the just-married Elaine (married to someone else), moviegoers across the country literally cheered. It seemed, as the young couple rode off in a public bus, that they were liberated. They had escaped the clutches of the Establishment.

But times change. 20 years later, when I showed the film to students, the attitude had shifted totally. Instead of cheering the liberated couple, the students asked, "Where are their things?"

A new materialism had emerged. I asked the students how many were anti-Establishment? None were. (Ironically director Nichols had said that Ben and Elaine were going to wind up like their parents.) The Graduate showed as much as any movie how people can see films completely differently at different times.

Today most people don't even know The Graduate, which once was a cultural milestone. Today corporations are entrenched everywhere. Government, churches, and banks are prevailing institutions. Higher education is now corporate. (Recently I received my university alumni magazine, and I never saw such a conglomeration of pompous-looking people. I didn't recognize my university. The sour cream had risen to the top.) In today's world of credit cards, plastic has had its revenge.

For 12 years one of the most anti-Establishment figures on tv was Andy Sipowicz on NYPD Blue. He was flawed and fallible, but as the show evolved, Sipowicz most of the time seemed to try to do the right thing, no matter how much his bosses -- some venal, others competent -- tried to rein him in. Sipowicz was an enduring anti-Establishment everyman.

But as NYPD Blue ends its run, two other figures have grasped the anti-Establishment mantle. They are both in top-20 shows. Jack Bauer in 24 and Gregory House in House still do battle against the system.

Both are relentless, bold individuals -- men of action who break the rules, sometimes reckless but effective. They are headstrong -- blessedly, they use their brains. They try to do the right thing. They constantly have to figure out ways to overcome the obstacles that the system and its vain arbiters put in their way. But have no fear -- they are better than the systems that try to thwart them.

24 is now in its 4th season, although it was on life support after its initial year. But Jack Bauer's tenacity keeps him alive on all fronts.

Agent Jack Bauer (no-nonsense Kiefer Sutherland) heads a field operations group of CTU (Counter Terrorist Unit). Sometimes it's a question of who will cause more damage -- the terrorists or the women around him. Fortunately Kim Raver has joined the cast as Jack's love interest Audrey, although Audrey seems completely unable to deal with two men in her life at one time. But at least, so far, she hasn't whined. She's easier to take than most of the women who have complicated Jack's life -- among them his bosses, whose orders he often has to ignore. And ignore them he does, as he forever strikes blows against the Establishment.

The newest anti-Establishment kid on the block is Dr. Gregory House, head of diagnostic medicine at a teaching hospital in New Jersey, in the provocative, new show, House. Unlike Gil Grissom in CSI, who too often frowns, bears it, and submits to authority, House is his own man. House (wonderfully portrayed by Hugh Laurie) pops pills and walks with a cane because of a severe leg condition. He plays with a yoyo and watches soap operas on tv. He is abrasive, arrogant, and cranky. His image says he doesn't care, but he cares obsessively. Dr. House's best characteristic is that he hates ignorance with a passion. There still seem to be enough tv watchers who can relate to this.

One of House's favorite lines is, "Everybody lies," which is not a bad way to see things if one is working in the Establishment.

Jack Bauer and Gregory House could have prevailed in the '60s, and they prevail in the 21st century. Some people don't change even though everything around them seems to. It's a different society, but they still resist ignorance and live with passion.

As Bauer and House soldier on, anti-Establishmentism isn't dead yet!