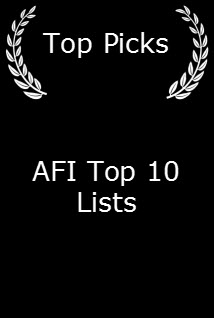 June 17 was the night CBS-TV had a three-hour program revealing the American Film Institute’s top 10 movies in 10 different genres. I had a special interest since I was one of the voters.

The AFI sent us a ballot of 500 movies (50 per genre), and we were to vote for 10 in each genre and list our top choice in each. We also could write-in one movie per genre if it wasn’t on the list.

But I had my doubts.

In the present world, a movie begins and ends with the grosses of its first week. There is little room for context and enduring quality.

Many older potential moviegoers don’t go to the movies any more, croaking, “They don’t make good movies anymore.” And young viewers see the movies as an instant thrill ride that ends when they get in line for the next amusement park high. They only have a “whee” register.

In this environment. it would not surprise me if AFI viewers who evaluate movies—even critics—become stodgy or fickle.

But they weren’t. Art prevailed.

The following are the genres, the AFI ratings, and my ratings:

The Lord of the Rings was the AFI’s #2 selection.

This was one of the few categories with which I had a disagreement. Voters in the AFI selected Scorsese’s Goodfellas as #2. It isn’t in my top 10; Scorsese’s Casino is.

My write-in: Sam Peckinpah’s The Ballad of Cable Hogue. The choice of The Searchers surprised and delighted me. The western is a nearly defunct genre. That the AFI went back and chose the John Ford-John Wayne classic helps keep the past alive. Clint Eastwood whose Unforgiven was the AFI’s #4 choice, said that Ethan Edwards in The Searchers was “a perfect role for John Wayne at that point in his career.”

My write-in: John Huston’s Fat City. I have no problem with the AFI”S choice. Scorsese’s Raging Bull is the better film.

Alfred Hitchcock had more movies than any director of genre films. He had four AFI picks in the mystery category: Vertigo (#1), Rear Window (#3), North by Northwest (#7) and Dial M for Murder (#9).

This is the category that depends most on the eye and heart of the beholder. I’m very pleased that the AFI chose the classic movie by Charlie Chaplin, whom I once voted #1 actor in a previous AFI poll. But this time I went with Jack’s neurotic panache.

AFI’s #1: To Kill a Mockingbird

This is my protest vote. D.W. Griffith’s The Birth of a Nation was left entirely off the ballot. This seems to be the only area where the AFI was cowardly. The Birth of a Nation has strong, offensive, racist themes, but Griffith was a giant. Without him, film would not have had its incredible birth. The AFI know that. I’m of two minds. My smaller mind says, ignore Birth because it is racist. My larger says, include Birth because it is phenomenal art. Desptie my rancor over the exclusion of D.W. Griffith’s classic, I’m proud to stand with the AFI’S other choices. To my great surprise I agreed with four of the AFI’s best movies and support all ten selections. The only movie I definitely would have left off the top 10 lists is the negligible “western” Cat Ballou, especially since The Magnificent Seven is not in the top 10.

To see the complete lists on the web, go to: AFI’s 10 top genre films.

CBS’s presentation was affecting. Gabriel Byrne (The Usual Suspects) and Isabella Rossellini (Blue Velvet) were articulate; Jessica Alba was not.

Michael J. Fox gave a touching tribute to The Pride of the Yankees and Lou Gehrig (Gary Cooper) and told how it helped him deal with his disease.

The most anguishing moment for me personally was when Ben Gazzara, who had suffered a stroke, tried to speak. I remember Gazzara as the best actor I ever saw on stage—a powerhouse.

From The Wizard of Oz to The Lord of the Rings, the AFI produced a celebration. The night of the 17th a full moon shone in the sky, full and wondrous. It was a perfect symbol for the genre movies.