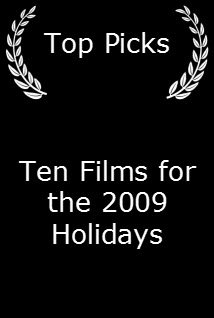 A holiday outing worthy of the whole family.

Two ratings [mine is the lesser]. Most audiences love this film about a large African-American taken by a feisty Southern woman (Sandra Bullock) into her family. The young man eventually is drafted by the NFL's Baltimore Ravens.

The "true" story -- not truly told -- is too manipulative for me. It's cotton candy in the ghetto.

Melted treats in your stocking -- sweet and sticky.

Up in the Air
3 stars

George Clooney is perhaps the most popular, engaging actor in movies today --whether playing a fox or a shark. In this smart comedy-drama, Clooney plays a shark -- who flies across the country coolly firing employees of downsizing companies.

One of Clooney's Christmas gifts should be a gift certificate to Kissing School. For a supposed romantic star, the man is a close-mouthed, unenthusiastic kisser. Come on, George, at least pretend.

Up in the Air has a clever script, but its big flaw is it tries to have it both ways. Near the end, the montage of fired victims extolling the concept of family is a sop.

Up in the Air is a piece of coal in a pretty ribbon.

A spectacular, sometimes strained look into a fabulous future. Celebrated director James Cameron makes a risky, huge budget ($320 million) effort to engage audiences in a film that is political. But a lot of people may not want to root for "tree huggers" against U.S. military/business. We'll see.

A huge package of CGI for the holidays.

Director Peter Jackson's adaptation of the immensely popular novel by Alice Sebold is uneven but formidable.

Jackson's scenes of heaven are lightweight, but his grasp of earthly terror is potent.

Saoirse Ronan is very affecting as the young victim. Stanley Tucci deserves an Oscar nomination as the bland but horrifying murderer.

Perhaps an unwanted holiday gift, and probably one you can't regift.

De Niro's ok, but unchallenged, in this tour of a dysfunctional family and America.

Make no mistake, I'm a fan of director Clint Eastwood, but his latest effort is disheartening. [See full review on tonymacklin.net].

Invictus has little action (unless rugby scrums apply), little character (only Morgan Freeman's Mandela is a character with any dimension), and little conflict.

This adds up to little entertainment.

Invictus is like getting an old sweater for Christmas from Grampa Clint.

Please Madonna, take back your former husband director Guy Ritchie, so he'll go back to making movies nobody sees like Swept Away (2002).

Robert Downey, Jr. gives a campy, tongue-in-cheek performance of Holmes as action hero, but Ritchie makes him put his tongue through his cheek.

Hellzapoppin for the holidays.

For those who want blow-up dolls for Xmas.

Director John Hillcoat's movie of the provocative novel by Cormac McCarthy about post-apocalypse America doesn't do any justice to the artful novel. Just because the topic is wretched shouldn't mean the movie has to be wretched. But it is.

Read the book over the holidays.