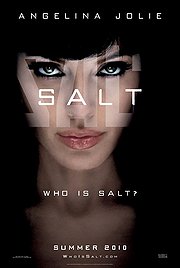 They can get you to identify with a character or root for an action.

Alfred Hitchcock, with stylistic aplomb, was the master of manipulation. Hitch could play on his audience's expectations. He could even get them to root for someone trying to sink an incriminating car in a body of water (Psycho, 1960) or a villain trying to recover his keys fallen down a drain (Strangers on a Train, 1951).

Hitch knew that audiences want to root, and so he implicated them.

In Salt director Phillip Noyce uses that concept to buffet and baffle us.

For the first half of Salt, we are engaged in a furious action movie -- car chases, incredible escapes, and other surefire, patented devices of the action genre.

We are well into our popcorn when we hit indigestible kernels that are bizarrely salty. It shocks our expectant taste buds.

Our heroine suddenly seems out of control, killing everything in sight. There's more than a hint of sadism. The movie's moral compass is spinning. Salt has all the morality of a video game.

Are we supposed to root for Evelyn Salt? We choke on our popcorn. Is she good, bad, amoral, or immoral?

Kill all the extras. Collateral damage be damned. Salt goes on a killing spree (e.g., 13 victims in one fell swoop). Salt is a killing machine -- if your grandmother was in her way, she'd blow a hole in her.

But just as we're about to give up, at the end of Salt a semblance of order has been restored.

Noyce and screenwriter Kurt Wimmer know they're manipulating the genre. They make allusions to past spy movies (e.g., the blade in the shoe of Lotte Lenya in From Russia with Love, 1963). But in 2010, friendly fire is our friend.

Australia-born Noyce knows his way around the genre. He put Jack Ryan through his paces in Patriot Games (1992) and Clear and Present Danger (1994).

He utilizes technical pros. Salt's cinematographer is Robert Elswit, who in 2008 won an Oscar for There Will Be Blood. Veteran James Newton Howard -- who has received eight Oscar nominations -- did the sprightly music score.

They have their shears out big-time. The movie is only 99 minutes -- a good running time. The editors like to cut away quickly, leaving lots of holes in their movie.

How did Salt get out of her cab? How did she get the secure alias Herandez? Can't the president, when he awakens, identify what happened?

But Hitch once said to me, "Logic is dull." Salt is not dull.

Salt is dependent on its star. Like Sean Connery, Harrison Ford, and Matt Damon, Angelina Jolie seizes and fully embodies her role.

Jolie is a tuning fork of energy. The first image of her is Salt being tortured in a North Korean prison. She is blond, bruised, bloody, and whimpering.

She goes through several physical transformations. In one she looks like a kick-ass Rachel Maddow.

Jolie makes a potent action heroine -- willful, vulnerable, and lethal. Her stunts are over the moon. As the CIA agent accused of being a double agent, she is a cauldron of vengeance.

Liev Scheiber, as Salt's CIA boss, brings a little gravity to a film that doesn't pay much attention to gravity. Chiwetel Ejiofor plays Peabody, another agent who can't decide whether to listen to Salt or punch her. The audience may share Peabody's confusion.

Major actor Andre Braugher is listed in the credits, but makes a very skimpy appearance. Keep a sharp eye, or you may miss him.

The editors left Braugher on the cutting room floor, or perhaps he fell to Salt's erratic fire.

Salt is spilled all over the place. Angelina Jolie's latest is a shaggy salt shaker.

After viewing the genre-abuse of Salt, we stumble out of the theater pole-axed but relieved.