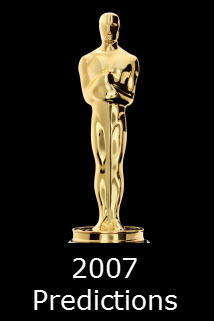 Since then the Academy has featured very diverse choices.

Here are my wary selections in the six major categories for the Oscars:

This year there’s an appealing sleeper in “Juno,” which has earned more than $120 million, which is terrific for a small, low-budget movie. There’s also a self-indulgent powderkeg, “There Will be Blood;” a lukewarm romance, “Atonement; ” and a nicely-crafted thriller, “Michael Clayton.”

“No Country for Old Men” should win. It’s a superb film, but it will put off some viewers with its violence and unresolved ending.

For others, the many tones and aspects of violence and the open ending are examples of filmmakers not dependent on focus groups. God bless them.

Best Actor: Daniel Day-Lewis (“There Will be Blood”)
This is a category in which two very deserving performances didn’t get nominations. Emile Hirsch (“Into the Wild”) and Josh Brolin (“No Country for Old Men”) carried their exceptional movies, but unfortunately they didn’t make the cut. In the final analysis, it probably doesn’t matter. Daniel Day-Lewis gave a scenery-chewing, oil- spewing tour de force performance which may dwarf others with its sheer bombast and audacity. Daniel Day-Lewis won the Best Actor Oscar for My Left Foot (1989). He should win again.

Best Actress: Julie Christie (“Away from Her”)
I preferred Marion Cotillard’s sometimes-stunning performance as the neurotic, French songbird Edith Piaf. Christie played a fading victim of Alzheimer’s disease who is institutionalized. Julie Christie won the Oscar for Best Actress for “Darling” (1966). Cotillard is French; Christie is British. There are more Anglophiles than Francophiles in the Academy. It’s between Christie and Cotillard.

Best Supporting Actor: Javier Bardem (“No Country for Old Men”)
Bardem seems a lock, as the most memorable villain since Hannibal Lector. (Anthony Hopkins received a Best Actor award for portraying Hannibal in “The Silence of the Lambs” in 1991.) Hal Holbrook (“Into the Wild”) might receive the Oscar if he weren’t up against the relentless Bardem. Bardem was mesmerizing.

Best Supporting Actress: Cate Blanchett (“I’m Not There”)
This should be a lock, but it may not be. This sometimes is the awkward age award going to actresses for their careers and for simply enduring. Remember Helen Hayes (“Airport”) in 1970. If it’ s the awkward age award, it will go to 83-year old Ruby Dee for her outing in “American
Gangster.” But Cate Blanchett should win for her incandescent performance as the electric-period Bob Dylan. If she wins, she surely will render a heartfelt eulogy to Heath Ledger, who played another replica of Dylan in “I’m Not There.” Amy Ryan has gotten some attention for “Gone Baby Gone.”

Best Director: Joel and Ethan Coen (“No Country for Old Men”)
The Coen Brothers are auteurs who have a distinctive touch. They won the Best Original Screenplay Oscar for “Fargo” (1996). Like Quentin Tarantino, who never had their staying power, the Coen Brothers have a vast knowledge of film and its history. “In No Country for Old Men,” they channeled Alfred Hitchcock, who never received an Academy Award for his direction, although he finally was awarded an honorary Oscar.

The fact that “Atonement’s” director Joe Wright didn’t even get a nomination seems to doom “Atonement’s” chance as Best Picture. The Best Picture Academy Award almost always goes to the winner of the Directors Guild of America. The Coens won this year’s DGA award.

It’s not always easy to gauge the Academy’s sensibilities. This year they gave the back of their liver-spotted hand to Sean Penn. Instead of the six
nominations Penn’s “Into the Wild” should have received (Picture, Director, Actor, Supporting Actor, Editing, and Song), it received only two (Holbrook and editing).

It is disheartening that one of Eddie Vedder’s songs — probably “Guaranteed” –wasn’t even nominated, while three songs from Disney’s “Enchanted” were nominated.

But that’s the Academy.

They’re Super Delegates, who aren’t always super. Let’s hope they are super enough to pick “No Country for Old Men.” The “Old Men” may appeal to them.